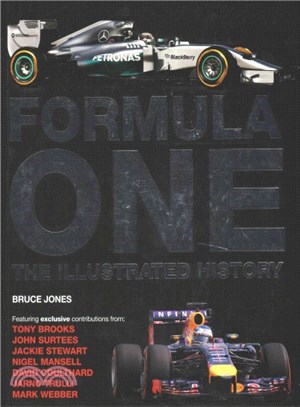 Follow the history of Formula One racing with this beautiful guide full of photographs, interviews, and more

When a grid of cars assembled at Silverstone in 1950 for the first round of a new Formula One World Championship, the people concerned would have had no idea that they were setting out on what was to become the world's most spectacular annual competition.Formula One: The Illustrated History tracks the highs and lows of more than six decades of scintillating sport which has followed, focusing on the epic battles that have unfolded between the leading teams and top drivers as they have raced their way around the globe. From Monaco to Singapore, from Fangio to Vettel, and from Ferrari to McLaren, each of the World Championships is discussed, supported by a stunning gallery of photographs and exclusive interviews with seven great Formula One drivers in which they add special insight to the decades in which they were chasing glory and burning rubber.
Bruce Jones, a former editor of Autosport magazine, is the author of the yearlyFormula One Guide, as well as BBC Sport World Formula One Records, The Complete Encyclopedia of Formula One, The Formula One Miscellany, andThe Treasures of Formula One.
PrevNext