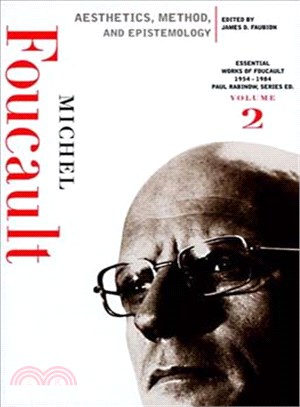 The second volume in the definitive collection of Foucault's shorter writings, a Voice Literary Supplement bestseller. Aesthetics, Method, and Epistemology explores one of the lesser known aspects of Foucault's oeuvre. This volume surveys the philosopher's diverse but sustained address of the historical forms and interplay of passion, experience, and truth. These selections, most of which have not previously appeared in English translation, are a testament to the extraordinary range of Foucault's insight. They include commentaries on the work of de Sade, Rousseau, Marx, Freud, Roussel, and Boulez. They also include some of Foucault's most trenchant reflections on the historical constitution and the historical diagnostics of both the aesthetic and the critical imagination, providing unique insight into the development of Foucault's original and exemplary philosophical program.
Michel Foucault (19261984) was one of the most influential philosophers of the twentieth century. He held a chair in the history of systems of thought at the College de France and lectured at universities throughout the world. The New Press has published his books Aesthetics, Method, and Epistemology; Ethics; Power; The Essential Foucault; and The Chomsky-Foucault Debate (with Noam Chomsky). Foucault’s other books include Madness and Civilization, Discipline and Punish, The Order of Things, and The History of Sexuality.

James D. Faubion is a professor of anthropology at Rice University. He is the author of The Shadows and Lights of Waco and Modern Greek Lessons and the editor of Michel Foucault’s Aesthetics, Method, and Epistemology and Power, both available from The New Press
PrevNext