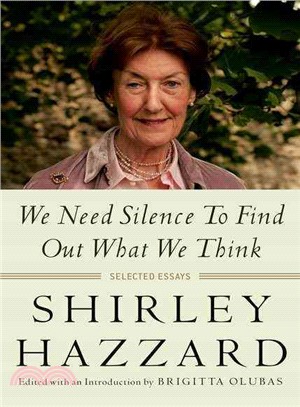 These nonfiction works span from the 1960s to the 2000s and were produced by one of the great fiction writers of the period. They add critical depth to Shirley Hazzard's creative world and encapsulate her extensive and informed thinking on global politics, international relations, the history and fraught present of Western literary culture, and postwar life in Europe and Asia. They also offer greater access to her brilliant craftsmanship and the multiple registers in which her writings operate.

Hazzard writes about the manifold failings of the United Nations, where she worked in the early 1950s. She shares her personal experience with the aftermath of the Hiroshima bombings and the nature of life in late-1940s Hong Kong. She presents her thoughts on the decline of the hero as a public figure in Western literature. These works contribute to a keener understanding of postwar letters, thought, and politics, supported by an introduction that situates Hazzard's writing within its historical context and emphasizes her influence on world literature. This collection confirms Hazzard's place within a network of writers, artists, and intellectuals who believe in the ongoing power of literature to console, inspire, and direct human life, despite--or maybe because of--the world's disheartening realities.

Shirley Hazzard won the National Book Award for her 2003 novel The Great Fire and the National Book Critics Circle Award forThe Transit of Venus. She is the author of The Evening of the Holiday and The Bay of Noon, which was nominated for the Lost Booker Prize; Greene on Capri, a memoir of Graham Greene; andPeople in Glass Houses, based on her time at the United Nations. She lives in New York City and Capri.

Brigitta Olubas is associate professor of English in the School of the Arts and Media at the University of New South Wales. She is the editor of theJournal of the Association for the Study of Australian Literature and the author of Shirley Hazzard: Literary Expatriate and Cosmopolitan Humanist.