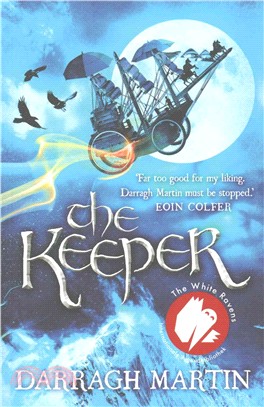 Ordinary books don’t move. Ordinary books are quite happy waiting to be picked up. You could leave an ordinary book somewhere uncomfortable—at the bottom of a dark schoolbag or in the middle of a shop window—and it wouldn’t dare budge, even if it had to sneeze. Nobody had told the Book of Magic this, though, so it jumped into Oisin’s hands without so much as a flap of its pages.

Oisin is not sure he wants to be Keeper of the Book of Magic—but when his little sister Sorcha is kidnapped by the Morrigan, a raven-goddess with a heart as dark as her feathers, he has to learn how to use the Book for good. Soon Oisin has a long journey ahead of him with only Stephen, his annoying older brother, and Antimony, a headstrong orphan with her own quest, to help him. Facing snow snakes, shadow fish, and mountains of wind, the three children have to decide whether or not they can trust each other—and the mysterious Book that’s leading them—if they want to reach the Morrigan’s Hill of Bones before it’s too late to get the last ever train home. This thrilling Celtic fantasy is perfect for fans of J. K. Rowling, Eoin Colfer, and J. R. R. Tolkien. A map and a glossary are included.

Darragh Martin was given a Fulbright Scholarship to develop his writing in 2006. He teaches literature at Columbia University and lives in New York City.
PrevNext