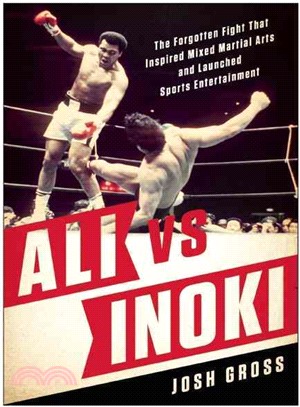 Inoki can use his bare fists. He can use karate. This is serious. There’s $10 million involved. I wouldn’t pull a fraud on the public. This is real. There’s no plan. The blood. The holds. The pain. Everything is going to be real. I’m not here in this time of my life to come out with some phony action. I want you to know this is real."
Muhammad Ali, June 14, 1976, The Tonight Show

On June 26, 1976, Muhammad Ali, possibly the most famous athlete in the world, flew to Japan to fight Antonio Inoki, Japan’s iconic pro wrestling champion, for the so-called martial arts championship of the world.” Broadcast to an audience of 1.4 billion in 34 countries, the boxer versus grappler spectacle foreshadowed, and in many ways, led to the rise of mixed martial arts as a major sport.

The contest was controversial, but the real action was behind the scenes, and various players in the underbelly of organized wrestling and boxing jockeyed for position. Egos, competing interests, and a general sense of apprehension over what would happen in the ring led to hodgepodge rules thrown together at the last minute. Bizarre plans to save” Ali if the fight got out of hand were also concocted. One schemecanceled at the last minuteinvolved having the boxer nicked with a razor blade if the fight got out of hand, forcing the referee to stop the fight.

In Ali vs. Inoki: The Forgotten Fight That Inspired Mixed Martial Arts and Launched Sports Entertainment, author Josh Gross gets inside Ali’s head leading up to the match by resurrecting pre-fight interviews that featured the boxer's famous pro wrestling-influenced trash talk he first encountered in Los Angeles in the early 1960s. Gross also introduces us to Inoki, little known in the United States but hugely influential in Japan. After the fight, Inoki became a household name throughout Asia, and his role in Japan’s popular Pride Fighting Championships helped shape modern mixed martial arts.
Josh Gross is considered a pioneer of mixed martial arts journalism. His reporting spans MMA's shift from an underground, counterculture free-for-all to a multibillion dollar industry regarded as one of the world's fastest growing sports today. During 15 years in the business, Gross can claim to be the only reporter who covered MMA full-time for Sports Illustrated and ESPN. Josh is known for investigative works, and he hosts a popular podcast, Gross Point Blank.
PrevNext