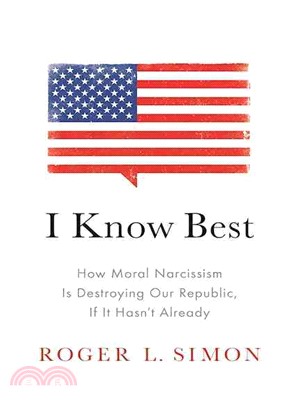 In 1979, Christopher Lasch published the epochal The Culture of Narcissism warning of the normalizing of narcissism in our society. Lasch may have understated it. 35 years later, in the Obama erawith its parade of endless, often inexplicable, scandalswe have a full blown epidemic of what has recently been called Moral Narcissism.

Forget Narcissus and his reflection, Moral Narcissismthe almost schizophrenic divide between intentions and results now pervading our cultureis the new method for feeling good about yourself. It no longer matters how anything turns out as long as your intentions were good, that you were moral.” And, just as importantly, the only determinant of those intentions, the only one who defines that morality, is you.

I Know Best goes beyond Lasch to lay bare how this moral narcissism is behind all those scandals from Obamacare to the Veteran's Administration to the IRS, Benghazi, Bergdahl, Syria and beyond. Everything the Obama administration did and does was about making them feel good about themselvesthe results be damned.

And they have as their allies those supreme moral narcissists in the academy, media and Hollywood, ever willing to ratify those good intentions and ignore those same results.

But I Know Best is not just about the Left. Moral Narcissism affects the right as well, even when they don’t realize it. It is a true epidemic that must be cured in order to save our democratic republic and our futures.
Roger L. Simon made his living writing novels and screenplays before he took the New Media plunge as co-founder and CEO of the pioneering blog aggregation and news and opinion website PJ Media (formerly Pajamas Media) in 2005. In books, he is best known for his series of the eight Moses Wine detective novels, which have been translated into over a dozen languages and won prizes from the Mystery Writers of America and the Crime Writers of Great Britain. The firstMoses Wine novel was The Big Fix, made into a film starring Richard Dreyfuss for which Simon wrote the screenplay, bringing him to Hollywood.

Among his many screenplays are Bustin' Loose (with Richard Pryor), Scenes from a Mall (with Bette Midler and Woody Allen) and the Paul Mazursky-directedEnemies, A Love Story, for which Simon was nominated for an Academy Award for Best Adapted Screenplay.A Better Life, for which Roger wrote the story, was released in 2011 with its lead actor, Damien Bichir, also nominated for the Best Actor Academy Award. Simon also directed the independent featurePrague Duet, starring Gina Gershon and based on a screenplay he wrote with his wife Sheryl Longin (Dick).

He has taught screenwriting at Robert Redford's Sundance Institute and at the American Film Institute. He has also written for theNew York Times, Los Angeles Times, Washington Post, Commentary and the New York Post, among many other publications. He is a former president of the PEN Center USA West, former vice-president of the International Association of Crime Writers and a former member of the board of the Writers Guild of America. His first non-fiction book Turning Right at Hollywood and Vine: The Perils of Coming Out Conservative in Tinseltown was published by Encounter Books in February 2009.The Party Linea stage play also written in collaboration with Sheryl Longin and set in Stalinist Russia and contemporary Amsterdamwas just published byThe New Criterion in November 2012.

Simonthe only person to be profiled favorably in one lifetime by Mother Jones andNational Reviewhas also been a public speaker, speaking on the topics of the effects of political change on people’s lives, Hollywood and politics, and the rise of New Media. He has appeared on television on the Larry Kudlow Show, Fox and Friends, CNBC, Fox Business and others and is a frequent guest on the Hugh Hewitt Radio Show.

Simon blogs at www.pjmedia.com/rogerlsimon. He is a graduate of Dartmouth College and the Yale School of Drama.
PrevNext