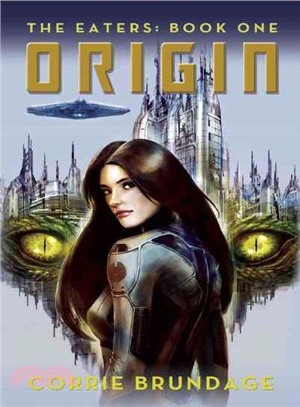 The Eaters is a character-driven, emotionally charged, action packed first person narrative trilogy, told by the strong but quirky woman protagonist , spanning 500 years, two galaxies, and three sentient species, bridging the genres of urban fantasy and sci-fi and appealing to women as well as men.

Book One: Origin opens in a mid-21st century Earth ravaged by climate change, where Dr. Mina Brice traverses the beleaguered globe with a team of scientists on missions to save species from extinction. Mina is a socially awkward, OCD woman with a secret ability animal telepathy all of which help her career but keep people at a distance, particularly physician Jack MacConnell, a dreamy and magnetic guy she’s always been crushing on. On a fateful mission to Nigeria, Mina and Jack finally hook up, but their budding relationship is interrupted by a massive tsunami that washes them all away.

Five hundred years later, Mina awakens in a utopian city created by seemingly benevolent aliens, the Travelers, and is informed by their human liaison, a severe, chain smoking woman known only as the Director, that, because of her previous life’s accomplishments, she was cloned to help oversee the well-being of the new Earth, restored by the Travelers after humans destroyed it centuries earlier in nuclear war. Later we learn that Mina was chosen for cloning because of her telepathic abilities, which will suit the Travelers’ true purpose: They’ve introduced the ultimate apex predator, called Eaters for brutally obvious reasons, into the ecosystem to cull the increasing population and toughen the too-docile humans, as the original Eaters did on the Travelers’ home world millennia ago and the Eaters are genetically engineered human clones. Only after Mina is reunited with Jack in the city of Origin does she realize that Jack morphs into an Eater, too, and also that she has a telepathic link with Eaters.

The citizens of Origin, called Originals, do not react as expected to the Travelers’ perhaps well-intended plan, and instead craft a futile rebellion out in the jungles that surround the city, forcing the Travelers to decide whether or not planet Earth should remain intact. They summon Mina to their orbiting spaceship, where she re-encounters the Director. In a battle of wits, Mina convinces the hardened woman to leave the planet alone and allow the humans to self-govern in ways natural to their species.

After rescuing Jack and bringing him to the Facility, the central scientific research center of the new Earth, where he is restored to human form, Mina tells him she’s pregnant. He in turn surprises her by taking her to an idyllic ocean cove that she had seen in recurring dreams in her first life as we learned in the opening scene in 21st century New York that he’s discovered really exists on the coast of what was once Mexico.
Corrie Brundage is a former model, opera singer, and personal trainer who, out of sheer boredom and personal relief from planetary insanity, completed five novels in the space of twelve months. Among these books areThe Eaters Trilogy (Origin, Return, and Journey), a character driven scifi romance depicting ecological dystopia, mysterious aliens, future shenanigans, space wars, and broken hearts.

She pumps iron, is a political junkie, and is a dedicated animal advocate.