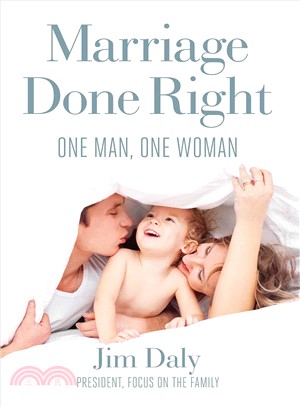 Jim Daly, the president of Focus on the Family, knows the ways to succeed in a healthy, moral marriage.
Jim Daly is president of Focus on the Family and host of the daily broadcast, heard by more than 2.9 million listeners a week on more than 1,000 radio stations across the U.S. The show was honored as 2012 Program of the Year by the National Religious Broadcasters (NRB).

Daly’s personal journey from orphan to head of an international Christian organization dedicated to helping families thrive is a powerful story. Abandoned by his alcoholic father at age 5, he lost his mother to cancer four years later a wound that deepened when his grieving stepfather emptied the family home and left Daly, the youngest of five children, and his siblings to fend for themselves after their mother's funeral.

Several tough years followed, including time in foster care, before Daly became a Christian in high school and found meaning and a sense of purpose.

I am living proof,” he wrote in his 2007 autobiography, Finding Home, that no matter how torn up the road has already been, or how pothole-infested it may look ahead, nothing nothing is impossible for God.”

Daly was named president of Focus on the Family in 2005 after 16 years with the ministry. Under his leadership, the organization has taken on a major role nationally in encouraging and helping facilitate foster-care adoptions, earning recognition from the White House and Congress for its efforts. The ministry also has reinvigorated its traditional focus on helping couples build strong marriages and raise healthy, resilient kids. In just the last 12 months, with the help of Focus on the Family, research indicates that 830,000 couples have built stronger marriages and 660,000 families have become stronger, healthier and more God-honoring.

Daly graduated from California State University, San Bernardino, in 1984 with a B.S. in Business Administration. During his senior year, he attended Waseda University in Tokyo, and after graduating worked for a Fortune 500 company. In 1997, he completed his MBA in International Business at Regis University in Denver. In 2009, he received an honorary Doctor of Letters degree from Colorado Christian University in Denver.

Daly has received the 2008 World Children’s Center Humanitarian Award, the 2009 Children’s Hunger Fund Children’s Champion Award, and the 2010 HomeWord Family Ministry Award. He has appeared on such television programs as Fox & Friends,” America Live with Megyn Kelly,” ABC World News Tonight” and PBS’ Religion & Ethics”; and been featured in Time, The Wall Street Journal, The New York Times, USA Today and Newsweek, which named him one of the Top 10 next-generation evangelical leaders of influence. He was the subject of a July 2011 cover story in Christianity Today and is a regular panelist for The Washington Post blog On Faith” alongside leading academics.

Daly has been married to his wife, Jean, since 1986. They have two sons and reside in Colorado Springs, Colo.
PrevNext