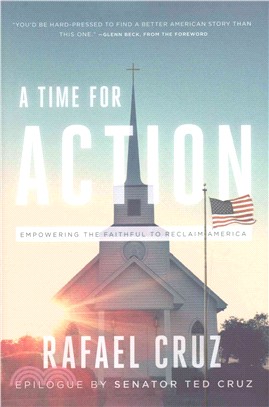 "You’d be hard-pressed to find a better American story than this one. . . . Rafael Cruz is one of the greatest freedom fighters of his generation." —Glenn Beck, from the foreword

America was founded on Judeo-Christian principles, by moral leaders, many of whom were strong Christians themselves. The first settlers were committed Christians seeking refuge from religious persecution abroad. In the last hundred years, America has been on a slippery slope, moving away from its founding principles, and in large part with little resistance from the Church.

In A Time for Action, Rafael Cruz presents a simple underlying message: For Christians, Jesus Christ should be the foundation of the lives they build and they should be active in making a difference in the world around them. In practical terms, that means we should strive for a free society that respects each of God’s children; we should embrace the Judeo-Christian values of love, joy, and peace; and we should seek a relationship with the living God. It means people of faith should actively participate in the political process in order to combat the debilitating and deceptive progressive mantra that there should be a separation of church and state.

A Time for Action is the story or one man’s quest for refuge from Cuban persecution to realizing the American dream. It is a story about one man finding true freedom that comes from faith in Jesus Christ. It is the story of this great nation that was founded on Judeo-Christian principles and why it has fallen from grace. It is a wake-up call to the faithful across the land to step up to the challenge of entering the public arena and taking on the forces at work to destroy the guiding principles that made this country great. Religious people must saddle up. They must vote and volunteer and campaign. They must get in the political game. The followers of Christ are, in His words, “the light of the world.” But for a light to have its effect, it has to shine in the darkness. That’s why our mission is “to declare,” as St. Paul said, “the whole counsel of God.” If we continue to remain silent, we will answer to God for our silence.

Rafael Cruz, the father of Senator Ted Cruz, was born in Cuba, where his involvement in the revolution landed him in jail. Eventually he fled Cuba for the United States, where he built a successful career and lived the American dream.
PrevNext