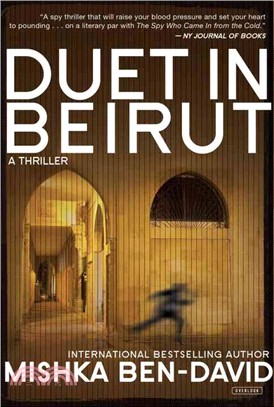 Ronen, a former agent of Israel’s legendary intelligence agency, the Mossad, disappears following a failed assassination on a Hezbollah operative. His wife—former Mossad herself—fears that he may be pursuing an unauthorized mission of revenge. She contacts his former commander, Gadi, to track Ronen down and stop him before he harms both himself and his country.

As revealing in its psychological acuity as it is in its portrait of life in the Mossad, Duet in Beirut is an essential thriller of espionage and political intrigue, written by an acclaimed novelist whose twelve years of service as an intelligence agent inform every gripping scene.

Mishka Ben-David was born in 1952 in Israel. He holds an MA in comparative literature from the University of Wisconsin and a PhD in Hebrew literature from the Hebrew University of Jerusalem. Ben-David served in the Mossad for twelve years, becoming a high-ranking officer, and he is now a full-time novelist living outside Jerusalem. His spy novels are being adapted for an international TV series.
PrevNext