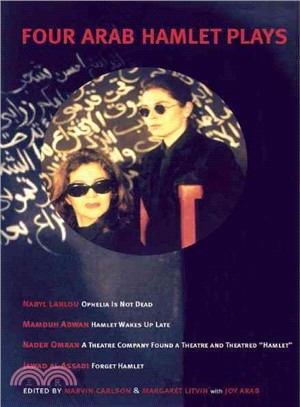 Jumping off from Shakespeare’s tragedy, the Arab Hamlet tradition has produced bitter and hilarious political satire, musical comedy, and farce. This volume samples that tradition with works by Moroccan Nabyl Lahlou (1968), Syrian Mamduh Adwan (1976), Jordanian Nader Omran (1984), Iraqi Jawad al-Assadi (1994), plus an autobiographical sketch by Egyptian Mahmoud Aboudoma (2006).
Marvin Carlson is Sidney E. Cohn Distinguished Professor of Theatre, Comparative Literature and Middle Eastern Studies in the Ph.D. Program at the City University of New York Graduate Center. His research and teaching interests include dramatic theory, Arabic theatre, and Western European theatre history and dramatic literature, especially of the 18th, 19th, and 20th centuries. He has been awarded the ATHE Center Achievement Award, the George Jean Nathan Prize, the Bernard Hewitt prize, the George Freedley Award, and a Guggenheim Fellowship. He received an honorary doctorate from the University of Athens. His best-known book,Theories of the Theatre (Cornell University Press, 1993), has been translated into seven languages. His most recent books areThe Haunted Stage (Michigan, 2001), which received the Calloway Award, Speaking in Tongues (2006) and Theatre is More Beautiful than War (2009).

Margaret Litvin is assistant professor of Arabic and Comparative Literature at Boston University and the author ofHamlet’s Arab Journey: Shakespeare’s Prince and Nasser’s Ghost (Princeton, 2011). Her work has appeared inCritical Survey, the Journal of Arabic Literature, Shakespeare Studies,Shakespeare Yearbook, and Shakespeare Bulletin, and she is the Arab world regional editor for the Global Shakespeares web archive.

Mahmoud Aboudoma (b. 1953) (Gamlet is Russian for Hamlet”) is an Alexandria, Egypt-based writer and director who founded and directs the Alternative Theatre Group. He also develops arts programming at the Biblioteca Alexandrina and since 2003 has directed an international festival, the Creative Forum for Independent Theatre Groups.

Mamduh Adwan (1941-2004) (Hamlet Wakes Up Late) was born in Hama in Syria. He was a prominent and beloved writer, poet, playwright and critic, producing 18 collections of poetry as well as two novels, 24 plays, 23 translations from English (including the Iliad, the Odyssey, and a biography of George Orwell), and a number of screenplays for television series.

Hani Afifi (I am Hamlet) was born in Cairo in 1978. He graduated from Cairo University’s Faculty of Arabic Language and Literature (Dar al-Ulum) in 2002 and was part of the second cohort of trainee directors at the Egyptian Ministry of Culture’s Artistic Creativity Center (2006-9). His play I am Hamlet was chosen for the 2009 Cairo International Festival of Experimental Theatre, where it won the Best Actor prize (Mohamed Fahim). He also works as a director for THEATRE-TV.

Jawad al-Assadi (Forget Hamlet) was born in Karbala in 1947 and graduated from Baghdad’s Theatre Academy in 1974. He fled Iraq in 1976, earning a PhD in theatre in Bulgaria and working in Eastern Europe, the United Arab Emirates, and elsewhere. He briefly returned to Baghdad in 2003, before moving to Lebanon to found the Babel Theatre in Beirut in 2007. He was awarded the 2004 Prince Claus Award for Theatrical Achievement.

Nabyl Lahlou (Ophelia Is Not Dead) is a Moroccan theatre director, playwright, and actor. Born in 1945 in Fes, he has studied and worked in France and Morocco and writes in both French and Arabic. His play in this volume is translated from the French.

Nader Omran (b. 1955) (A Theatre Company Found a Theatre and Theatred Hamlet”) graduated from Cairo’s Academy of Arts in 1977 and founded the Fawanees Theatre Group in Jordan two years later. In 1994 Omran and the Fawanees launched the Amman International Theater Festival, the first annual event of its kind in the Arab world to operate without direct government financing.
PrevNext