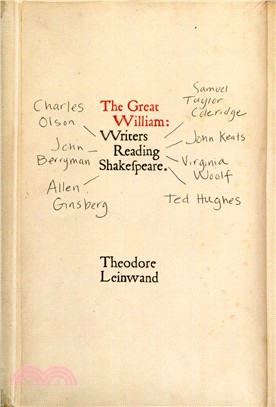 The Great William: Writers Reading Shakespeare consists of seven case studies--based on marginalia, lectures, letters, journals, and reading notes—that capture what happened when Samuel Taylor Coleridge, John Keats, Virginia Woolf, Charles Olson, John Berryman, Allen Ginsberg, and Ted Hughes read Shakespeare. Scholars who examine the ways writers respond to Shakespeare’s work typically argue from these writers’ verse and prose--end-products distant in both time and form from their reading. This is the first book-length study to pursue writers as they struggle with Shakespeare in the act of reading. Alone among studies devoted to Shakespeare’s effect on later writers, Theodore B. Leinwand’s book relies on archival evidence to show how writers wrestle with Shakespeare on the very pages from which they read, at the time they are reading. The effect is to bring to light complex intellectual and emotional encounters ignored by standard Shakespeare influence studies. All of the writers discussed here grappled with Shakespeare over the course of decades, with an intensity and the scrupulousness that can only fill us with admiration. The poignant scenes of reading that Leinwand recovers--encounters both of triumphant self-confidence and crushing anguish--speak to the vulnerable humanity of these writers reading Shakespeare.
Theodore Leinwand is professor of English at the University of Maryland. He is the author ofThe City Staged and Theatre, Finance, and Society in Early Modern England, as well as a consulting editor forShakespeare Quarterly.
PrevNext