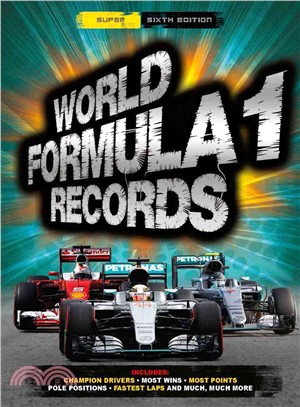 The sixth edition of the BBC’s popular record book, now fully revised and updated to include the spectacular 2015 season!  Focusing exclusively on the world of Formula 1, the biggest and most glamorous of all racing competitions, this fan favorite highlights the great battles for the World Drivers’ Championship and the Constructors’ Cup since they began in the 1950s. Along with fantastic action photography, there are hundreds of stories and statistics on the legendary drivers, teams, and tracks.
Bruce Jones has been covering motor sports for more than 30 years and is one of the best-known and most respected faces in pit lanes around the world. He has written countless books on racing, especially Formula 1, including the annual bestsellingFormula 1 Guide (now in its 19th edition), The Treasures of Formula One, World Atlas of Formula 1 From Above,Grand Prix Yesterday & Today, and The Complete Encyclopedia of Formula One (all Carlton). As a journalist he worked onAutosport in the mid-1980s, a magazine acknowledged as the voice of motor sport the world over, eventually becoming Editor. In addition to writing, Bruce has been a pit lane interviewer for FOM Television. Branching into event commentary, he regularly broadcasts at the Le Mans 24 Hours and, his favorite event of the year, the Goodwood Revival historic race meeting.
PrevNext