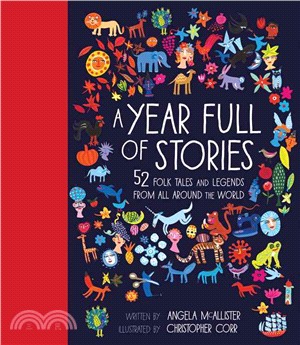 This treasury of 52 stories collects together a rich resource of myths, fairy tales and legends from around the world, with a story for every week of the year. The book is broken into 12 chapters, for each of the 12 months of the year, and throughout, stories are matched to internationally celebrated dates, including Valentines Day and the International Day of Friendship, as well as seasonal events and festivals. Collected and retold by award-winning author Angela McAllister, and illustrated by internally recognised artist Christopher Corr, this is a book that will be treasured by families and appeal to teachers and librarians around the world.

ANGELA MCALLISTER is the author of over 70 books for children and teens. Her books have won several awards, including the Red House Book Award for 'Yuck! That's Not a Monster!' and the Stockport and Portsmouth Awards for 'My Mum has X-Ray Vision'. Her picturebook, 'Leon and the Place Between' has been adapted for the stage and was shortlisted for the Kate Greenaway Award. She has collaborated with many illustrators, including Grahame Baker-Smith, Alex T. Smith, Margaret Chamberlain, Ross Collins and Peter Bailey.

CHRISTOPHER CORR is an established author/illustrator whose many books have won him international acclaim. He studied at the Royal College of Art, and now lives and works in London as an artist and tutor at Goldsmiths University.