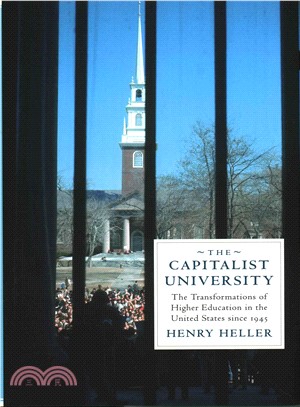 Higher education news today can more or less be boiled down to one sentence: the university is in crisis. Skyrocketing student debt, decreased public financing, the weakening of tenure, the rise of adjunct labor, battles over the value of the humanities, calls for skills focused instruction—all the problems besetting contemporary higher education in the United States are interrelated, and they can all be traced to one fact: campuses and classrooms are now battlegrounds in the struggle between knowledge for its own sake and commodified learning.
Henry Heller offers here a magisterial account of the modern university that shows exactly how we’ve reached this point. Taking readers from the early Cold War—when support for universitieswas support for capitalism—through the countless social, political, and educational changes of the ensuing decades, Heller reveals how American educational institutions have been forced to decide between teaching students to question the dominant order and helping to perpetuate it. And they’ve had to do so knowing that all the pressure politics and finance was pushing for the latter.
Heller covers such key moments as McCarthyism and the Berkeley Free Speech Movement, as well as contemporary struggles including the attempts at unionization of post-doctorals, the National Adjuncts Walkout Day in 2015, the protests in Missouri related to race, workplace benefits, and leadership, and the firing of Steven Salaita for his pro-Palestinian tweets, which sparked a huge controversy around free speech and academic freedom.The Capitalist University is a thoroughly grounded radical history of an institution whose influence and importance—and failures—reach deep into American political and social life.
Henry Heller is professor of history at the University of Manitoba, Canada and the author ofThe Birth of Capitalism: A 21st-Century Perspective, The Cold War and the New Imperialism: A Global History, andThe Bourgeois Revolution in France.
PrevNext