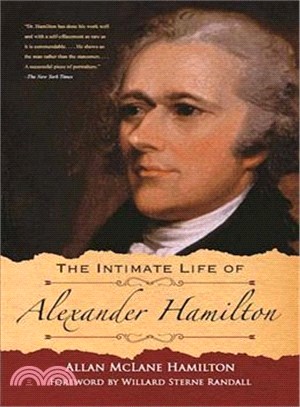 The life of Alexander Hamilton is certainly one of great complexity and controversy and, as a result, has been of great interest to the general public for centuries. In the past two hundred years, there have been many accounts of Hamilton’s life?mostly commenting on his political personality rather than his character, but none have touched upon the private life of the man quite like The Intimate Life of Alexander Hamilton.

Drawn chiefly from collected original family letters and documents, some never published before this book’s initial publication in 1910, Hamilton’s grandson Allan McLane Hamilton presents a portrait of one of America’s chief founding fathers unlike any other, recounting the life of his grandfather with an unmatchable insider’s eye. The author intimately discusses his grandfather’s private affairs in great detail, dispelling many rumors about Hamilton’s personal life. The book presents an astounding portrait of the man and his character, revealing a softness and charisma unknown to the public at the time of its publication. From primary sources so close to Hamilton they could very well be called heirlooms, Hamilton’s private life and personality are described with a closeness only a member of his family could possibly provide.

Return to this forgotten classic, and see what one of America’s most controversial historical figures was like behind closed doors in The Intimate Life of Alexander Hamilton.
Allan McLane Hamilton was the grandson of Alexander Hamilton. A noted psychiatrist, he is best known for authoring several works in that field including Recollections of an Alienist. He served as an expert, witness or advisor to many insanity trials. He lived in New York and passed away in 1919.

After a successful seventeen-year career as a feature writer for the Philadelphia Bulletin, magazine writer for the Philadelphia Inquirer, investigative journalist for Philadelphia Magazine and stringer for Time-Life News Service, Willard Sterne Randall pursued advanced studies in history at Princeton University. Biographer of Benjamin and William Franklin, of Benedict Arnold, Thomas Jefferson, George Washington, Alexander Hamilton, and Ethan Allen, he has co-authored collections of biographies and e-books with his wife, the biographer and award-winning poet, Nancy Nahra. As a journalist, Randall won the National Magazine Award for Public Service from Columbia Graduate School of Journalism, the Standard Gravure Award, the Hillman Prize, the Loeb Award and the John Hancock Prize. His Benedict Arnold biography received four national awards and was a New York Times Notable Book. Publishers Weekly chose his biography of Jefferson as one of the ten best biographies of 1993. He received the Award of Merit of the American Revolution Round Table. He taught American history at John Cabot University in Rome and at the University of Vermont and Champlain College, where he was a Distinguished Scholar in History and is a Professor Emeritus. He is a contributing editor to MHQ: The Quarterly Journal of Military History. He lives, writes, teaches, lectures and likes to swim in Burlington, Vermont.
PrevNext