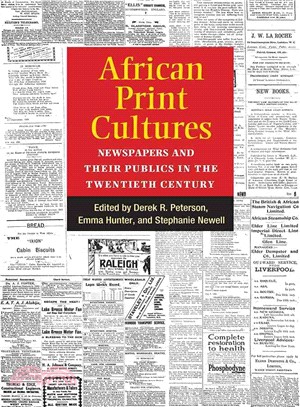 This inaugural volume in the African Perspectives series features the work of new and well-established scholars on the diversity and heterogeneity of African newspapers published from 1880 through the present. Newspapers played a critical role in spreading political awareness among readers who were subject to European colonial rule, often engaging in anticolonial and nationalist discourse or popularizing support for African nationalism and Pan-Africanism. Newspapers also served as incubators of literary experimentation and new and varied cultural communities.

The contributors highlight the actual practices of newspaper production at different regional sites and historical junctures, while also developing a set of methodologies and theories of wider relevance to social historians and literary scholars. The first of four thematic sections, “African Newspaper Networks,” considers the work of newspaper editors and contributors in relating local events and concerns to issues affecting others across the continent and beyond. “Experiments with Genre” explores the literary culture of newspapers that nurtured the development of new literary genres, such as newspaper poetry, realist fiction, photoplays, and travel writing in African languages and in English. “Newspapers and Their Publics” looks at the ways in which African newspapers fostered the creation of new kinds of communities and served as networks for public interaction, political and otherwise. The final section, “Afterlives, ” is about the longue durée of history that newspapers helped to structure, and how, throughout the twentieth century, print allowed contributors to view their writing as material meant for posterity.

Derek R. Peterson is Professor of History and African Studies at the University of Michigan.

Emma Hunter is Lecturer in African History at the University of Edinburgh.

Stephanie Newell is Professor of English and Senior Research Fellow in International and Area Studies at Yale University.
PrevNext