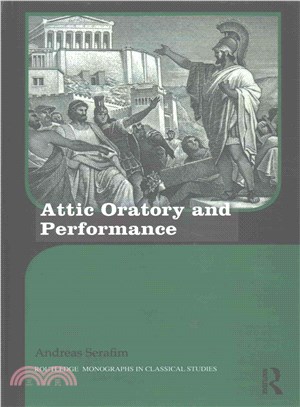 This book addresses a relatively neglected area in the study of ancient rhetoric: the performance of the speeches that have come down to us in textual form. Although it has never been doubted that Athenian oratory was performed, only a limited amount of scholarly attention has been devoted to this dimension of the corpus. Scholarly opinion has tended to consider it an impossible task to reconstruct performance through an interpretation of the text or to elaborate on the exact nature of the relationship between oratory and theatre. Attic Oratory and Performance fills this gap by providing an in-depth analysis of the ways Attic orators wrote for and executed performance.

Through an examination of four legal speeches by Aeschines and Demosthenes, two of the most famous oratorical opponents in ancient Greece, author Andreas Serafim identifies key elements of oratorical performance, including the portrayal of litigants, theatrical language, imagery, and delivery, and expounds on how use of these elements influenced the reception of speeches. This book is unique in its reliance on and close analysis of primary textual materials, which provide useful windows into the performative dimension of oratory. This book will be essential reading for scholars in classical studies and ancient history.