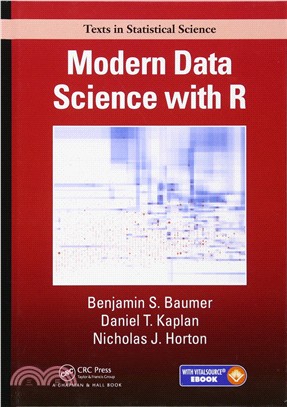 Modern statistical methods allow the analyst to fit and assess models as well as to undertake supervised or unsupervised learning to extract information. Contemporary data science requires tight integration of these statistics, computing, data skills, mathematics and communication. The purpose of this book, which is intended for readers with some background in statistics and modest prior experience in scripting and programming, is to help them develop and practice the appropriate skills to tackle complex data science projects.

Benjamin S. Baumer is an assistant professor in the Statistical & Data Sciences program at Smith College. He has been a practicing data scientist since 2004, when he became the first full-time statistical analyst for the New York Mets. Ben is a co-author of The Sabermetric Revolution and won the 2016 Contemporary Baseball Analysis Award from the Society for American Baseball Research.

is the DeWitt Wallace professor of mathematics and computer science at Macalester College. He is the author of several textbooks on statistical modeling and statistical computing, and received the 2006 Macalester Excellence in Teaching award.

is a professor of statistics at Amherst College. He is a Fellow of the American Statistical Association (ASA), member of the NRC Committee on Applied and Theoretical Statistics, recipient of a number of national teaching awards, author of a series of books on statistical computing, and actively involved in curricular reform to help students "think with data."
PrevNext