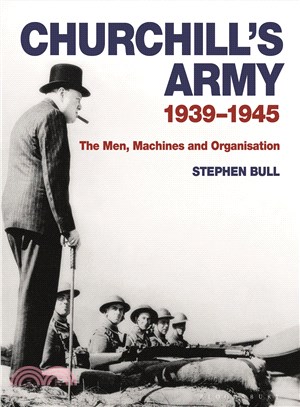 Winston Churchill, Britain's iconic war time Prime Minister, is inextricably linked with the victorious British Army of 1939 to 1945. Yet hindsight, propaganda, and the imperative of the defeat of Hitler and Imperial Japan, have led to a tendency to oversimplify the image of Churchill the war leader, and 'his' Army. For whilst Churchill was undeniably a towering statesman, his relations with both the Army and War Office were ambiguous and altered considerably not only with the progress of the Second World War, but over decades.

In this comprehensive book, Stephen Bull examines every aspect of the British Army during the Second World War, and considers in detail the strengths and weaknesses of an organization that was tested to its limits on many fronts but made an immense contribution to the successful Allied outcome.

The book explores the structure of military power from the men who ran it, the Generals to the detail of the regiments they commanded. It looks at the uniforms the soldiers wore and the badges and insignia they bore on their uniforms. The weaponry Churchill's army used is discussed in detail, from small arms including rifles, bayonets, grenades, carbines and machine guns to the massed firepower of the artillery along with the increasing sophistication of tanks and other military vehicles during the period. Finally the role of auxiliary and special forces and their contribution to the campaign is considered.

The comprehensive text is enhanced by more than 200 contemporary photographs.

Dr Stephen Bull studied at the University of Wales, and worked at the BBC and National Army Museum in London. He is currently Curator of Military History and Archaeology for Lancashire County Museums. His books have been published in a variety of languages. He has made many TV and radio appearances including the series Battlefield Detectives and Instruments of Death, and the BBC One Show and wrote the book for the Channel 4 series Last War Heroes. A consultant to the University of Oxford, Stephen has assisted in the creation of a European database to document the individual experience of the First World War through archives, photographs, and objects.
PrevNext