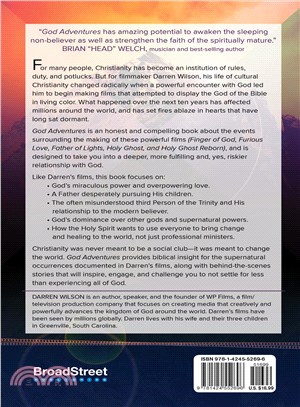 For many people, Christianity has become an institution of rules, duty, and potlucks. But for filmmaker Darren Wilson, his life of cultural Christianity changed radically when a powerful encounter with God led him to begin making films that attempted to display the God of the Bible in living color. What happened over the next 10 years has affected millions around the world, and has set fires ablaze in hearts that have long sat dormant.

Your God Is Too Small is a book about not only the events surrounding the making of these powerful films, but is also designed to take the reader into a deeper, more fulfilling and, yes, riskier relationship with God. Each film Darren has made focuses on a different aspect of God.Christianity was never meant to be a social club—it was meant to change the world. This book will provide stories and teaching that will inspire, engage, and challenge every person who reads it to do just that.
Darren Wilson is the CEO and founder of WP Films, a film/television production company that focuses on creating media that creatively and powerfully advances the kingdom of God. Millions of viewers worldwide have seen Darren’s films. Devon Franklin, VP of Production at Columbia Pictures, calls Darren “one of the most innovative filmmakers and authors of faith today.” Darren was recently named one of the “21 Emerging Leaders of Tomorrow’s Church” by Charisma magazine.
?
Darren has also written two other books: Filming God and Finding God in the Bible. Both detail his spiritual journey.?Darren lives with his wife, Jenell, and their three children in Greenville, South Carolina. Connect with Darren at wpfilm.com.
?
PrevNext