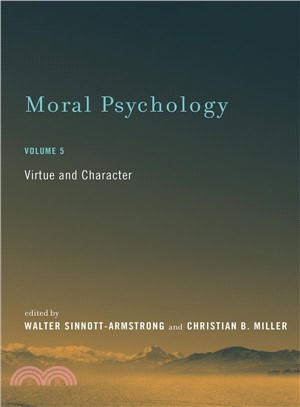 Philosophers have discussed virtue and character since Socrates, but many traditional views have been challenged by recent findings in psychology and neuroscience. This fifth volume of Moral Psychology grows out of this new wave of interdisciplinary work on virtue, vice, and character. It offers essays, commentaries, and replies by leading philosophers and scientists who explain and use empirical findings from psychology and neuroscience to illuminate virtue and character and related issues in moral philosophy. The contributors discuss such topics as eliminativist and situationist challenges to character; investigate the conceptual and empirical foundations of self-control, honesty, humility, and compassion; and consider whether the virtues contribute to well-being.

Walter Sinnott-Armstrong is Stillman Professor of Practical Ethics in the Philosophy Department and the Kenan Institute for Ethics at Duke University. He edited the previous volumes in Moral Psychology. Christian B. Miller is Professor of Philosophy at Wake Forest University and Director of the Character Project (www.thecharacterproject.com).