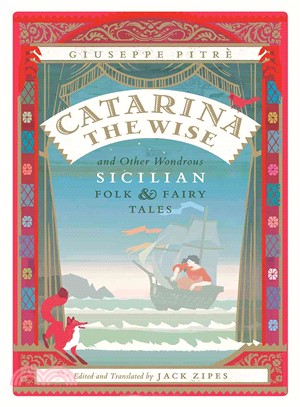 Well, gentlemen, here’s a tale that people have told time and again . . . .

So begins the title story in this collection of fifty Sicilian folk and fairy tales edited and translated by noted folklore scholar Jack Zipes. But while some of the stories may sound as if they’ve been told time and again—such as variations on Cinderella and Puss in Boots—many will enchant English-language readers and storytellers for the first time. From “The Pot of Basil” to “The Talking Belly,” “The Little Mouse with the Stinky Tail” to “Peppi, Who Wandered out into the World,” the stories in Catarina the Wise range from simple tales of getting a new dress or something good to eat to fantastical plots for outwitting domineering husbands, rescuing impoverished fathers, or attracting wealthy suitors (frequently the Prince of Portugal). Many feature strong, clever women (usually daughters who become queen). Many are funny; many are wise. Some are very, very strange.

As Zipes relates, the true story of their origins is as extraordinary as the tales themselves. Born to a poor family of sailors in Palermo, Giuseppe Pitrè would go on to serve with Garibaldi, become a traveling country doctor, and gather one of the most vast collections of folk and fairy tales of the nineteenth century. But while his work as a folklorist rivaled that of the Brothers Grimm, Pitrè remains a relative unknown. Catarina the Wise highlights some of the most delectable stories at the heart of his collection. Featuring new, original illustrations, this book is a beautiful, charming treasure for any fan of story, storytelling, and heroines and heroes living happily ever after—sometimes.
Jack Zipes is professor emeritus of German and comparative literature at the University of Minnesota. Among his many edited or translated collections and original books are The Complete Fairy Tales of the Brothers Grimm, The Original Folk and Fairy Tales of the Brothers Grimm, and Grimm Legacies: The Magic Power of the Grimms’ Folk and Fairy Tales. He lives in Minneapolis, MN.
PrevNext