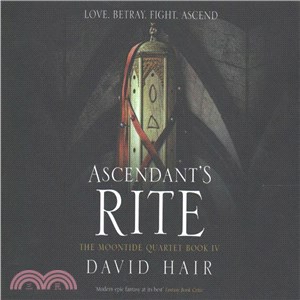 The last few months of the moontide—when the bridge connecting East and West rises above the sea—has come, and in the West Emperor Constant prepares the final phase of his plan to conquer the East.

For failed mage Alaron and his companion Ramita—widow to the mage who built the Leviathan Bridge—the unthinkable has happened. They have lost the Scytale of Corineus, the key to the Rite of Ascendancy, as well as one of Ramita's infant sons, to the hands of their deadliest enemies.

In Javon, Cera Nesti, the imprisoned queen, has been freed, and plots to take on the overwhelming might of the Rondian Empire. But standing between her and her goal is a band of deadly mercenaries playing a dangerous game of their own.

And in the East, Seth Korion's Lost Legions must navigate treacherous roads to gain safety, bearing secrets that could bring down the Emperor.

The time has come for the Rite of Ascendancy to be performed. New powers must rise to save or damn Urte, and on the mighty Leviathan Bridge itself, all will be decided.