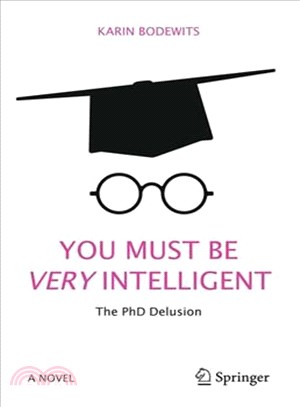 You Must be Very Intelligent is the author’s account of studying for a PhD in a modern, successful university. Part-memoir and part-exposé, this book is highly entertaining and unusually revealing about the dubious morality and desperate behaviour which underpins competition in twenty-first century academia.

This witty, warts-and-all account of Bodewits´ years as a PhD student in the august University of Edinburgh is full of success and failure, passion and pathos, insight, farce and warm-hearted disillusionment. She describes a world of collaboration and backstabbing; nefarious financing and wasted genius; cosmopolitan dreamers and discoveries that might just change the world… Is this a smart people’s world or a drip can of weird species? Modern academia is certainly darker and stranger than one might suspect…

This book will put a wry, knowing smile on the faces of former researchers. And it is a cautionary parable for innocents who still believe that lofty academia is erected upon moral high ground…

I was born April, 1983, in a small village in the economically dead North East of the Netherlands. As a child I mainly caught frogs and leapt over ditches. When life became meaningful (though not necessarily better), I dreamt about travelling the world as a field biologist.

At the age of seventeen, I swapped village life for a university town 20 miles up the road. I matriculated at the University of Groningen and studied biology. One of the first-year courses entailed sitting for hours in dreary drizzle to watch geese pick grass. Unfortunately, I felt slightly bored and wet and steered my studies towards microbiology which, thankfully, entailed a roof over my head during experiments. Six amiable years later, blurred by pub visits and lengthy ‘work’ sojourns in China and Spain, I graduated with an MSc in molecular biology and was increasingly gripped by science.

Having acquired a taste for travel and cultural enrichment, and perhaps a bizarre yearning to return to drizzle, I moved to the wonderful, historic city of Edinburgh, capital of Scotland, to start my PhD. Despite a ludicrous intake of Irn Bru (a chemical drink unique to Scotland) along with mountainous amounts of fried pizza and dubious frat-ish parties, I successfully defended my thesis in 2011.

Feeling like a lost soul, I backpacked round South America, not knowing what would or should come next. But something had to, because I ran out of money, so I started my first ‘real’ job, at the Ludwig-Maximilians-University in Munich. Having re-stocked my pocket, and feeling sufficiently proficient in the academic world, I quit a year later. In 2012, I co-founded the company NaturalScience.Careers. In 2015, I published my first book (a career guide for female natural scientists). <

These days, I give soft skill and career seminars to young scientists, and I’m often invited to speak at natural science events. I write short stories, career columns and opinion pieces for magazines like Chemistry World, Naturejobs, Laborjournal and Nachrichen aus der Chemie. With my partner Philipp and our two sons, I live in Munich, where I spend much time wondering what to do next.