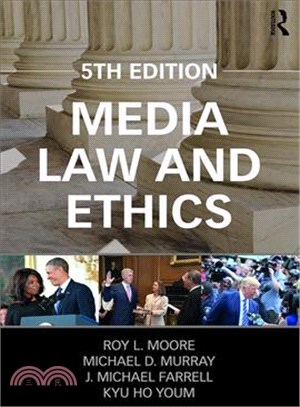 Media Law and Ethics is a truly comprehensive overview and a thoughtful introduction to media law principle and cases and the related ethical concerns relevant to the practice of professional communication. This is the first textbook to explicitly integrate both media law and ethics within one volume. Since it integrates both the law and ethics, it is ideal for both undergraduate and graduate courses in media law and ethics. New co-author Dr. Kyu Ho Youm helps provide this new edition with an international scope, having written a chapter in the previous edition on international and foreign law. The book also covers the most timely and incendiary issues in modern American media.

is UM Board of Curators' Distinguished Teaching Professor on the UM-St. Louis campus. He has taught at Virginia Tech, University of Louisville and was founding director of the Greenspun School of Journalism at UNLV. He holds a Ph.D. from the University of Missouri-Columbia and was recently elected the first Governor Emeritus of the National Academy of Television Arts and Sciences for Mid-America.

is Professor and Jonathan Marshall First Amendment Chair at the University of Oregon. His research on freedom of expression has been widely cited by U.S. and foreign courts, including the British House of Lords, the High Court of Australia, the Supreme Court of Canada, and the Supreme Court of the Philippines. His research is used extensively by U.S. and international lawyers representing clients in press freedom litigation and international media. He holds a Ph.D. from Southern Illinois University-Carbondale and graduate law degrees from Oxford University and Yale Law School.
PrevNext