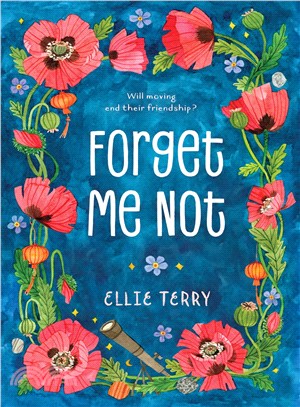 A girl tries to hide her quirks at a new school in this middle-grade novel from debut author Ellie Terry.

Astronomy-loving Calliope June has Tourette syndrome, so she sometimes makes faces or noises that she doesn't mean to make. When she and her mother move yet again, she tries to hide her TS. But it isn't long before the kids at her new school realize she's different. Only Calliope's neighbor, who is also the popular student body president, sees her as she truly is—an interesting person and a good friend. But is he brave enough to take their friendship public?

As Calliope navigates school, she must also face her mother's new relationship and the fact that they might be moving—again—just as she starts to make friends and finally accept her differences.

Partially in verse and partially in prose with two intertwined points of view, Ellie Terry's affecting debut will speak to a wide audience about being true to oneself.

Praise for Forget Me Not:

“Terry’s debut novel thoughtfully traces the fragile emotions of two seventh graders: Calliope, a girl painfully self-conscious about having Tourette syndrome, and Jinsong, a popular boy she meets in her new town. Terry, who has Tourette syndrome herself, offers enormous insight into an often-misunderstood condition, writing in verse for Calliope’s chapters and prose for Jinsong’s. Her poetic explorations of Calliope’s anxiety and Jinsong’s moral struggles are honest and moving.” —Publishers Weekly

“Terry, who herself lives with Tourette’s syndrome, movingly draws from her own experience as she describes Callie’s experiences and behaviors. The narrative alternates between Callie’s and Jin’s perspectives, with Callie’s chapters in affecting, varied poems and Jin’s in plain prose and e-mails. This heartfelt, multivoice story with a meaningful message about friendship and acceptance is perfect for kids who appreciate realistic, character driven stories, such as Rebecca Stead’s Goodbye Stranger (2015).” —Booklist

“Written in a patchwork of prose poetry and free verse, Terry’s narrative deftly represents the reality of TS in its fullness. It works to deconstruct common misconceptions, such as that those who have TS have a propensity to swear, and sheds light on the raw confusion and the frightening nature of a physical experience that is utterly unpredictable . . . This exploration of Calli’s neurological disorder and her struggle to find her place will stay in the hearts and minds of readers for a long time….” —School Library Journal

“Terry’s debut novel is a rare treat—a beautiful story of middle grade friendship, crushes, accepting differences, and how to deal with the school bullies. Terry’s use of figurative language and symbolism is magical. It will offer lessons in tolerance, acceptance, and kindness toward those different than themselves.” —School Library Connection

Ellie Terry is a poet, writer, and reader who is diagnosed with Tourette syndrome. She loves baking brownies and has a slight obsession with the moon. She lives in Utah with her husband and their three children.
PrevNext