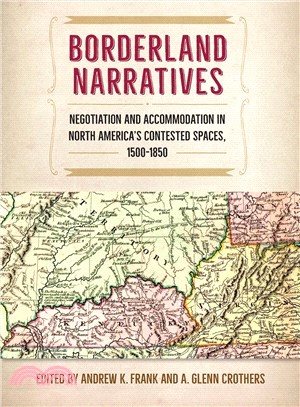 Broadening the idea of "borderlands" beyond its traditional geographic meaning, this volume features new ways of characterizing the political, cultural, religious, and racial fluidity of early America. It extends the concept to regions not typically seen as borderlands and demonstrates how the term has been used in recent years to describe unstable spaces where people, cultures, and viewpoints collide.

The essays include an exploration of the diplomacy and motives that led colonial andNative leaders in the Ohio Valley--including those from the Shawnee and Cherokee--to cooperate and form coalitions; a contextualized look at the relationship between African Americans and Seminole Indians on the Florida borderlands; and an assessment of the role that animal husbandry played in the economies of southeastern Indians. An essay on the experiences of those who disappeared in the early colonial southwest highlights the magnitude of destruction on these emergent borderlands and features a fresh perspective on Cabeza de Vaca. Yet another essay examines the experiences of French missionary priests in the trans-Appalachian West, adding a new layer of understanding to places ordinarily associated with the evangelical Protestant revivals of the Second Great Awakening.

Collectively these essays focus on marginalized peoples and reveal how their experiences and decisions lie at the center of the history of borderlands. They also look at the process of cultural mixing and the crossing of religious and racial boundaries. A timely assessment of the dynamic field of borderland studies, Borderland Narratives argues that the interpretive model of borders is essential to understanding the history of colonial North America.

Andrew K. Frank is the Allen Morris Associate Professor of History at Florida State University. He is the author or editor of several books including Creeks and Southerners: Biculturalism on the Early American Frontier. A. Glenn Crothers, associate professor of history at the University of Louisville, is the author of Quakers Living in the Lion’s Mouth: The Society of Friends in Northern Virginia, 1730–1865.
PrevNext