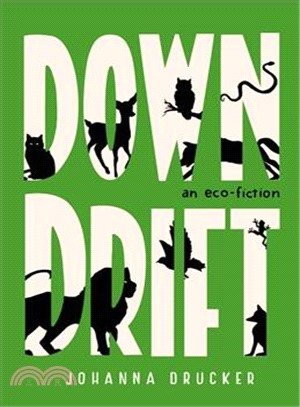 Narrated by an Archaeon, a 3.8 billion year old species, the oldest on earth, Downdrift is a work of speculative eco-fiction that describes the impact of ecological pressures on animals that are adopting human behaviors, with droll and sometimes alarming, results. The book follows a year of changes and the travels of a housecat and a lion who are inexplicably driven towards a rendezvous. At first, a few isolated harbingers of change appear, but they quickly escalate. Squirrels take up manic knitting, wild hares steal earth-moving equipment, rats go in for disco music and form-fitting metallic leisure-ware. Data-sorting abilities appear among urban populations of birds, and frenzied domestic pets seek celebrity careers. Droll, melancholic, and poetic, the tale is crammed with witty vignettes and poignant reflections on the ways the pressures on the once-natural world are accelerating mutations in behaviors among the animals. Genetic material alters. The differences between animals blur. Odd mutant forms appear–goat-chicks and dog-flies, fish-birds and flying lizards–as if some mad rush is propelling genetic code to propagate across every form of flesh and living matter. As large-scale infrastructure projects make their appearance, each of the animals takes the role appropriate to its disposition—or not. Melancholic rather than apocalyptic, the book is a celebration of species as well as a mourning of the damage done in our time. Throughout, the emergent voice and character of the Archaeon extremophile records events as well as a slow coming to consciousness about its own identity as a hyper-organism.
Johanna Drucker is an artist, writer, critic, historian, and theorist internationally known for her creative and scholarly work in digital humanities, history of the book, visual poetry, and artists’ books. She began making letterpress editions in the 1970s in the context of the Bay Area poetry scene, where language writing and book arts were flourishing. She has lived in Amsterdam, Paris, New York City, on the island of Santorini, New Haven, Charlottesville, and Dallas, and has held faculty positions at Yale, Harvard, Columbia, Virginia, and UCLA, among other institutions. Her work as a book artist was the subject of a retrospective in 2012, Druckworks: Forty Years of Books and Projects. She has published more than a dozen scholarly works and as well creative writing titles including: The Alphabetic Labyrinth (Thames and Hudson, 1994), Graphesis: Visual Forms of Knowledge Production (Harvard, 2014), As No Storm (Rebis, 1975), Italy (The Figures, 1980), Dark Decade (Detour, 1995), Diagrammatic Writing (Onomatopee, 2014), and Fabulas Feminae (Litmus Press, 2015). Her text, The Century of Artists’ Books (Granary 1995), is considered the definitive work in the field. She is currently working on a database memoire, ALL the books I never wrote or wrote and never published.
PrevNext