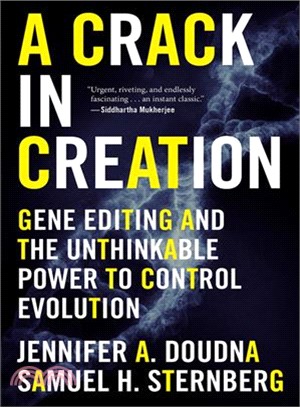 “Urgent, riveting, and endlessly fascinating...This book is destined to become an instant classic. Read it and understand its implications if you want to understand our biological future.”—Siddhartha Mukherjee, Pulitzer Prize–winning author of The Emperor of All Maladies

Not since the atomic bomb has a technology so alarmed its inventors that they warned the world about its use. Not, that is, until 2015, when biologist Jennifer Doudna called for a worldwide moratorium on the use of the new gene-editing tool CRISPR—a revolutionary new technology that she helped create—to make heritable changes in human embryos. The cheapest, simplest, most effective way of manipulating DNA ever known, CRISPR may well give us the cure to HIV, genetic diseases, and some cancers. Yet even the tiniest changes to DNA could have myriad, unforeseeable consequences—to say nothing of the ethical and societal repercussions of intentionally mutating embryos to create “better” humans.

Writing with fellow researcher Samuel Sternberg, Doudna shares the thrilling story of her discovery, and passionately argues that the ability to rewrite the code of life comes with enormous responsibility.

DR. JENNIFER A. DOUDNA runs a research laboratory and institute at UC Berkeley and is a leading expert on RNA-protein biochemistry, CRISPR biology, and genome engineering.

DR. SAMUEL H. STERNBERG is a biochemist and CRISPR expert and will start his own laboratory as assistant professor at Columbia University, beginning in 2018.
?
PrevNext