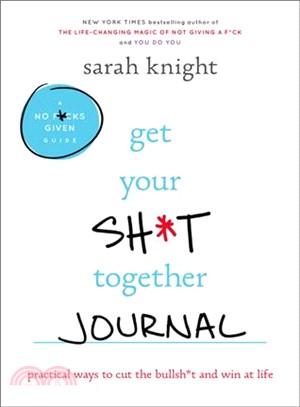 
Whether you're stuck in a job or relationship you hate, overwhelmed by a million emails, or just need a little help along the way to world domination, the hardest part is knowing where to start. That's where internationally bestselling "anti-guru" Sarah Knight comes in.
With the Get Your Sh*t Together Journal, Sarah helps you figure out what you want, how to get there, and how the heck to get it all done by coaching you through the big sh*t and small sh*t you need to achieve your goals.
With space to write in your goals, milestones, and to-dos, along with hilarious graphics, drawings, and straight-talking advice, The Get Your Sh*t Together Journal is a must-have tool in your arsenal for getting it together and living your best life.
Sarah Knight's first book, The Life-Changing Magic of Not Giving a F*ck, has been published in eighteen languages and counting, and her TEDx talk, "The Magic of Not Giving a F*ck," has more than two million views. The second book in the No F*cks Given guides series, Get Your Sh*t Together, is a New York Times bestseller, and her third, You Do You, was published in November 2017. Her writing has also appeared in Glamour, Harper's Bazaar, Marie Claire, Red, Refinery29, and elsewhere.
After quitting her corporate job in 2015 to pursue a freelance life, she moved from Brooklyn, New York, to the Dominican Republic, where she currently resides with her husband and a sh*tload of lizards.
Learn more at sarahknightauthor.com or follow her on Twitter and Instagram @MCSnugz. You can also sign up for her No F*cks Given newsletter at tinyletter.com/sarahknight.
PrevNext