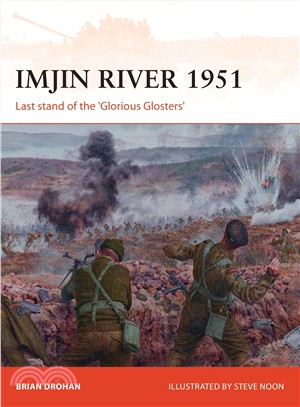 After China's November 1950 intervention in the war and the subsequent battle of the Chosin Reservoir, UN forces faced a new onslaught in the spring of 1951, with over 350,000 veteran troops attacking along the Imjin River. The US 3rd Infantry Division took the brunt of the attack along with the attached British 29th Infantry Brigade (officially styled the 29th British Independent Infantry Brigade Group), which included the Gloucestershire Regiment (the “Glosters”).

The heroic defense of the American and British forces would pass into legend, most especially the doomed effort of the Glosters, as they sought to buy time for the rest of the UN forces to regroup and organize an effective defense of Seoul, the South Korean capital city. Featuring full color commissioned artwork, maps, and first-hand accounts, this is the compelling story of one of the most epic clashes of the Korean War.

Brian Drohan is an active duty US Army officer with 11 years of service. He has led an armored platoon with the 1st Infantry Division in Iraq, served at the US Embassy to Sri Lanka, and taught history at the US Military Academy--West Point. He has written several articles for academic, professional military, and general audiences. His doctoral dissertation was named the 2016 honorable mention by the Society for Military History for its Edward M. Coffman First-Manuscript Prize; it is currently under review for publication at a university press. Brian has an upcoming assignment to South Korea as a strategic planner on the Eighth US Army general staff and is perfectly positioned to gather first-hand material for this project. He lives in Carlisle, Pennsylvania, USA.
PrevNext