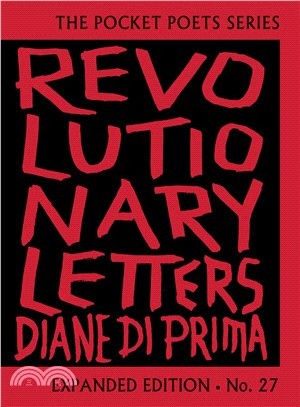 Fifty years ago, in 1968, Diane di Prima began writing her “revolutionary letters,” a series of poems composed of a potent blend of utopian anarchism and ecological awareness, projected through a zen-tinged feminist lens. In 1971, Lawrence Ferlinghetti published them in the first edition of Revolutionary Letters as Number 27 in the City Lights Pocket Poets Series, with a cover featuring his own distinctive calligraphic interpretation of the title.

By turns a handbook of countercultural activity and a broadside against the repressive state apparatus, Revolutionary Letters remains one of the vital classics of American poetry. Di Prima has published four subsequent editions (three of them with City Lights), adding new material each time. Revolutionary Letters: Expanded Edition is the latest iteration of this 50-year project, published in a deluxe, board-bound edition and featuring the original cover. Beginning with the poems from the first edition along with what was added along the way, the collection ends with di Prima’s latest “letters,” written in the decade between 2007-2017.

I have just realized that the stakes are myself / I have no other / ransom money, nothing to break or barter but my life

"Revolutionary Letters are action philosophy on the road to soul-building, to our realized mammal-hood, and to our humanity … di Prima's imagination and inspiration cause these poems to become more brilliant with passage of time, and with the growing number of more recent Letters water-falling over the lip of what we think is possible."—Michael McClure

“Diane di Prima, revolutionary activist of the 1960s Beat literary renaissance, heroic in life and poetics: a learned humorous bohemian, classically educated and twentieth-century radical, her writing, informed by Buddhist equanimity, is exemplary in imagist, political and mystical modes. … She broke barriers of race-class identity, delivered a major body of verse brilliant in its particularity.”—Allen Ginsberg

Born in Brooklyn in 1934, Diane di Prima emerged as a member of the Beat Generation in New York in the late ’50s; in the early ’60s, she founded the important mimeo magazine, The Floating Bear, with LeRoi Jones (Amiri Baraka). In the late ’60s, she moved to San Francisco, where she would publish her groundbreaking Revolutionary Letters (1971) with City Lights. She is the author of over 40 books, including Memoirs of a Beatnik, Pieces of a Dream, Recollections of My Life as a Woman, Loba, and The Poetry Deal. She served as San Francisco Poet Laureate from 2009-2011.