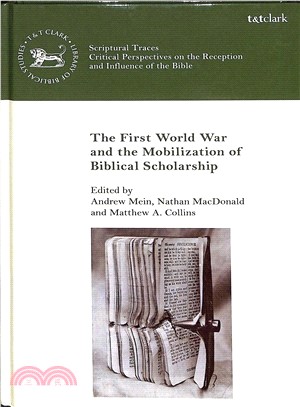 This fascinating collection of essays charts for the first time the range of responses by scholars on both sides of the conflict to the outbreak of war in August 1914. The volume examines how scholars, like their compatriots from every walk of life, responded to the great crisis they faced and shows that with relatively few exceptions, scholars wanted to contribute to the war effort.

But how? Some joined up as soldiers, as in the case of the Leipzig New Testament Professor Caspar René Gregory, who at 67 was Germany's oldest volunteer. More commonly, biblical scholars and theologians put pen to paper as part of the torrent of patriotic publication that arose both in the United Kingdom and in Germany. This volume shows how in many cases scholars were repeating or refining common arguments about the responsibility for the war. In Germany and Britain, where the Bible was still central to a Protestant national culture, we also find numerous more specialized works, where biblical scholars brought their own disciplinary expertise to bear on the matter of war in general, and this war in particular. As such the volume offers new insights into the place of both the bible and biblical scholarship in early 20th-century culture.

Andrew Mein is Assistant Professor of Hebrew Bible/Old Testament at the University of Durham, UK.

Nathan MacDonald is University Lecturer in Hebrew Bible at the University of Cambridge and Fellow of St John's College, UK.

Matthew A. Collins is Senior Lecturer in Hebrew Bible and Second Temple Judaism at the University of Chester, UK.