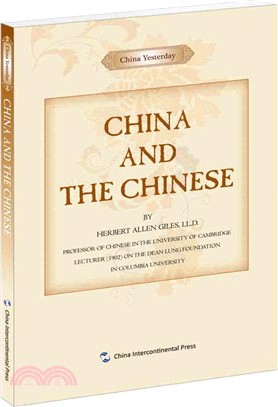 《中國和中國人》通過大量實例講述了中國的語言特點、劍橋圖書館所藏有關中國的圖書、中國的行政管理制度、中國與古希臘的比較、道教，以及中國的民風和習俗。 The "China Yesterday" series include a few Sinological and biographical works on the topics of Chinese history, literature, society, etc. All these works were written by foreigners and shed light on China in unique perspectives. With lots of examples, China and the Chinese expounds on features of Chinese language, books about China in the Cambridge Library, Chinas administrative system, comparison between China and ancient Greece, Taoism, and Chinese folk customs.
翟理斯（Herbert Allen Giles，1845—1935），1867年來到中國，歷任天津、寧波、漢口、廣州、汕頭、廈門、福州、上海、淡水等地英國領事館翻譯、領事等職，歸國後任劍橋大學教授。 Herbert Allen Giles (8 December 1845 – 13 February 1935) was a British diplomat and sinologist who was the professor of Chinese at Cambridge University for 35 years.
LECTURE I
THE CHINESE LANGUAGE
Its Importance— Its Difficulty— The Colloquial— Dialects—“Mandarin”— Absence of Grammar— Illustrations— Pidgin-English—Scarcity of Vocables— The Tones— Coupled Words— The Written Language— The Indicators— Picture Characters— Pictures of Ideas—The Phonetics— Some Faulty Analyses
LECTURE II
A CHINESE LIBRARY
The Cambridge (Eng.) Library— (A) The Confucian Canon—(B) Dynastic History— The “Historical Record”— The “Mirror of History”— Biography— Encyclop?dias— How arranged—Collections of Reprints— The Imperial Statutes— The Penal Code—(C) Geography— Topography— An Old Volume— Account of Strange Nations— (D) Poetry— Novels— Romance of the Three Kingdoms—Plays— (E) Dictionaries— The Concordance— Its Arrangement—Imperial Catalogue— Senior Classics
LECTURE III
DEMOCRATIC CHINA
The Emperor— Provincial Government— Circuits— Prefectures—Magistracies— Headboroughs— The People— The Magistrate— Other Provincial Officials— The Prefect— The Intendant of Circuit (Taot‘ai)—Viceroy and Governor— Taxation— Mencius on “the People”— Personal Liberty— New Imposts— Combination—Illustrations
LECTURE IV
CHINA AND ANCIENT GREECE
Relative Values of Chinese and Greek in Mental and Moral Training— Lord Granville— Wên T’ien-hsiang— Han Yü— An Emperor— A Land of Opposites— Coincidences between Chinese and Greek Civilisations— The Question of Greek Influence— Greek
Words in Chinese— Coincidences in Chinese and Western Literature—Students of Chinese wanted
LECTURE V
TAOISM
Religions in China— What is Tao?— Lao Tz?— The Tao Tê Ching—Its Claims— The Philosophy of Lao Tz?— -Developed by Chuang Tz?— His View of Tao— A Taoist Poet— Symptoms of Decay— The Elixir of Life— Alchemy— The Black Art— Struggle between Buddhism and Taoism— They borrow from One Another— The Corruption of
Tao— Its Last State
LECTURE VI
SOME CHINESE MANNERS AND CUSTOMS
Origin of the Queue— Social Life— An Eyeglass— Street Etiquette— Guest and Host— The Position of Women— Infanticide—Training and Education of Women— The Wife’s Status— Ancestral Worship— Widows— Foot-binding— Henpecked Husbands— The
Chinaman a Mystery— Customs vary with Places— Dog’s Flesh—Substitutes at Executions— Doctors— Conclusion
INDEX
If the Chinese people were to file one by one past a given point, the interesting procession would never come to an end. Before the last man of those living to-day had gone by, another and a new generation would have grown up, and so on for ever and ever. The importance, as a factor in the sum of human affairs, of this vast nation,—of its language, of its literature, of its religions, of its history, of its manners and customs,—goes therefore without saying. Yet a serious attention to China and her affairs is of very recent growth. Twenty-five years ago there was but one professor of Chinese in the United Kingdom of Great Britain and Ireland; and even that one spent his time more in adorning his profession than in imparting his knowledge to classes of eager students. Now there are all together five chairs of Chinese, the occupants of which are all more or less actively employed. But we are still sadly lacking in what Columbia University appears to have obtained by the stroke of a generous pen,—adequate funds for endowment. Meanwhile, I venture to offer my respectful congratulations to Columbia University on having surmounted this initial difficulty, and also to prophesy that the foresight of the liberal donor will be amply justified before many years are over. I have often been asked if Chinese is, or is not, a difficult language to learn. To this question it is quite impossible to give a categorical answer, for the simple reason that Chinese consists of at least two languages, one colloquial and the other written, which for all practical purposes are about as distinct as they well could be. Colloquial Chinese is a comparatively easy matter. It is, in fact, more easily acquired in the early stages than colloquial French or German. A student will begin to speak from the very first, for the simple reason that there is no other way. There are no Declensions or Conjugations to be learned, and consequently no Paradigms or Irregular Verbs. In a day or two the student should be able to say a few simple things. After three months he should be able to deal with his ordinary requirements; and after six months he should be able to chatter away more or less accurately on a variety of interesting subjects. A great deal depends upon the method by which he is taught. The written or book language, on the other hand, may fairly be regarded as a sufficient study for a lifetime; not because of the peculiar script, which yields when systematically attacked, but because the style of the book language is often so extremely terse as to make it obscure, and sometimes so lavishly ornate that without wide reading it is not easy to follow the figurative phraseology, and historical and mythological allusions, which confront one on every page.
PrevNext