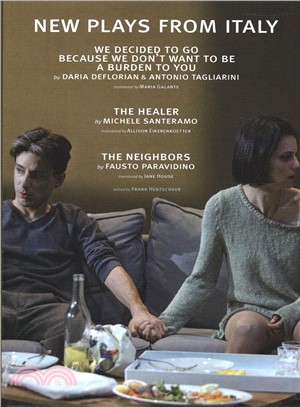 After reading Petros Markaris’s novel “Termination”, we found the perfect source for our work. The Greek writer opens the first chapter with the image of four retired housewives who voluntarily commit suicide leaving a simple, powerful message: "We realized that we are a weight to the state, doctors, pharmacists and society. So we decided we’ll be off, to spare you further worry. You'll save our four pensions and you’ll live better". The play opens in this suburban apartment where the women have just taken their “sleeping” pills. A reflection on suicide not as an existential act, but as an extreme political act. Is there an altruistic suicide? We looked for similar gestures in History. The one of Jan Palach, who during the Prague’s Spring in 1969, set himself on fire as an act of protest against censorship, and that of the buddhist monk Thich Quang Duc, who in 1963 similarly did the same gesture to combat the persecution of his religion in Vietnam.

We decided to go because we don't want to be a burden to you was originated with Monica Piseddu and Valentino Villa, and opened at Roma Europa Festival 2013. It won the 2014 Ubu Award for Dramaturgical Research. Three of their texts have been collected in the book, "The invisible Trilogy" (Titivillus 2014).

The healer is a man who connects stories to people, to cure them. He is tired and old and drinks grappa. Healing is not an easy matter, it takes need carelessness, liberation and separation. He is neither a magician nor a doctor, but merely an obscure compromise.

He is alone in the apartment. He hears some footsteps coming from the landing. Trying not to make a sound, he looks through the spyhole. He tells Greta when she comes home that he saw the neighbors. How were they? He cannot tell, seeing is not understanding, but he is scared. Why? Who knows? What about Greta? No, Greta is not afraid of the neighbors. She can’t wait to meet them. But she’s afraid of the Old Lady. Which old lady? The Old Lady she sees at night, the one who used to live in the building. This is a play about our fears, real and imagined, about ourselves and the other, about neighbors near and far, about war.

He also wrote Le scarpe, Cirano, Sogno degli artigiani in 2007 and Fanculopensiero stanza 510. Sequestro all’italiana (finalist at Riccione per il Teatro Award 2009). He is author of Le Scarpe together with Teatro Minimo and co-produced by Fondazione Pontedera Teatro (2010) and La rivincita (2012). He won the Riccione Award Teatro Award 2011 for Il guaritore. In 2012 he wrote Il giorno del Signore.