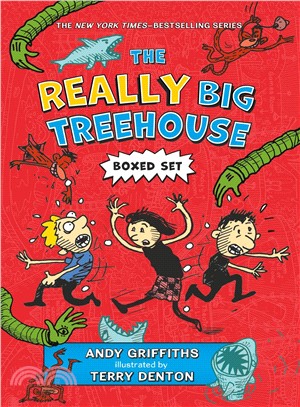 Andy and Terry live in a treehouse. But it's not just any old treehouse, it's the most amazing treehouse in the world!

This treehouse starts with thirteen stories, a bowling alley, a see-through swimming pool, and a secret underground laboratory. And it keeps getting bigger! Soon the treehouse has twenty-six stories, then thirty-nine as Andy and Terry keep adding more levels and rooms, including a skate ramp, anti-gravity chamber, an active volcano, a chocolate waterfall and more!

"Will appeal to fans of Jeff Kinney and Dav Pilkey. . . . The wonderfully random slapstick humor is tailor-made for reluctant readers... A treat for all." —Booklist

The 26-Story Treehouse
"Twice the treehouse, twice the fun? You bet . . . Kids should be flipping pages faster than a pair of inflatable underpants can skyrocket the young heroes to safety." —Publishers Weekly, starred review

New York Times–bestselling author Andy Griffiths, who wrote the Treehouse series, Killer Koalas From Outer Space, The Big Fat Cow That Goes Kapow, The Cat on the Mat Is Flat, and The Day My Butt Went Psycho! is at his best in these wild storytelling adventures, perfect for readers of all ages.

Terry Denton has worked with Andy on many books, including the Treehouse series and Killer Koalas From Outer Space. He lives in Australia with his wife and three kids.