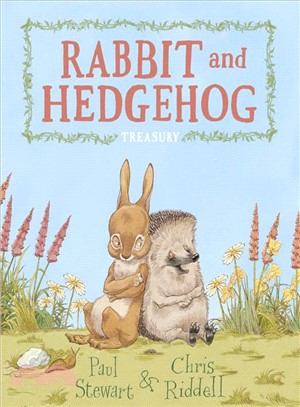 This uplifting collection from Chris Riddell and Paul Stewart's wonderful world of Rabbit and Hedgehog includes all four stories:
Rabbit’s Wish
A Little Bit of Winter
What Do You Remember?
The Birthday Presents
From birthdays to remembering games, from hibernation to wishes come true, Rabbit and Hedgehog's wonderful adventures have been brought together for the very first time in this exquisitely bound treasury. Filled with true friendship and adventure, these are tales to be enjoyed again or for the very first time.

'Hedgehog and Rabbit are a winning pair.' Daily Telegraph

Paul Stewart is a highly regarded author of books for young readers. Together with Chris Riddell, he is co-creator of the bestselling Edge Chronicles series, which has sold over three million books and is now available in over thirty languages. They are also co-creators of the Far-Flung Adventure series, which includes Fergus Crane, Gold Smarties Prize Winner, Corby Flood and Hugo Pepper, Silver Nestle Prize Winners, and the Barnaby Grimes Series. Chris Riddell is an acclaimed artist of children’s books and a political cartoonist for the Observer. Among other titles, Chris illustrates the Ottoline young fiction series and the Goth Girl series, as well as working closely with Paul Stewart on the Edge Chronicles and Wyrmeweald. Children's Laureate from 2015-2017, he has won many awards for his work, including the Nestlé Gold Award, the UNESCO Award for Something Else and the rare honor of two Kate Greenaway Medals.