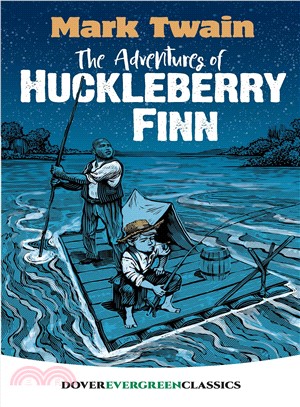 "You don't know about me, without you have read a book by the name of The Adventures of Tom Sawyer, but that ain't no matter. That book was made by Mr. Mark Twain, and he told the truth, mainly. There was things which he stretched, but mainly he told the truth."
With these words, Huckleberry Finn draws us into the narrative that forever changed the course of American literature. Huck's view of Southern life in the years leading up to the Civil War, delivered with a country boy's accent, sparked a new realism in storytelling.
Huck's voice is that of an outsider, fleeing the authority figures attempting to "sivilize" him. His companion, Jim, is a runaway slave whose bid for freedom is even more desperate. Their story — raising issues of prejudice and racism, slavery and freedom — faces questions no American novel had ever addressed. Loaded with hilarious escapades and unforgettable characters, this tale of adventures along the Mississippi River provides thought-provoking entertainment.

After the Civil War, Samuel Clemens (1835–1910) left his small town to seek work as a riverboat pilot. As Mark Twain, the Missouri native found his place in the world. Author, journalist, lecturer, wit, and sage, Twain created enduring works that have enlightened and amused readers of all ages for generations.
PrevNext