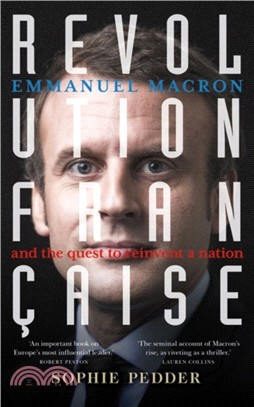 The extraordinary story of how an outsider candidate--an unknown technocrat and economics minister on the fringes of French politics--made his way to the Élysée palace, with expert analysis of his first year in office.

Two years after Emmanuel Macron came from nowhere to seize the French presidency, Sophie Pedder, The Economist’s Paris bureau chief, tells the story of his remarkable rise and time in office so far. In this paperback edition, published with a new foreword by the author, Pedder reflects on Macron’s troubles and triumphs: his dwindling popularity; the 'gilets jaunes' protests and resulting civil unrest; his efforts to transform France and lead the global fight against climate change; the Benalla affair; his erratic relationships with Angela Merkel, Donald Trump, Vladimir Putin and Theresa May, and the future of the European project.

On the eve of important European elections, and with nationalist and populist forces rising across the continent, she considers whether Macron can hold the centre ground and defend the multilateral liberal order against the axis of such figures as Italy’s Matteo Salvini and Hungary’s Viktor Orbán. Pedder also analyses the domestic situation in France, the evolution of En Marche, and the fall-out from Macron’s controversial reforms.
Meticulously researched and written in Pedder’s gripping and immensely readable style, this is the essential, authoritative account for anyone wishing to understand Macron and the future of France in the world.

Sophie Pedder has been Paris Bureau Chief of The Economist since 2003. She has interviewed Emmanuel Macron on numerous occasions since 2012, and followed him closely during the 2017 election campaign, securing notebooks of first-hand material on which this book is based. An award-winning journalist, she appears regularly to comment on French politics on CNN, the BBC and other media.
PrevNext