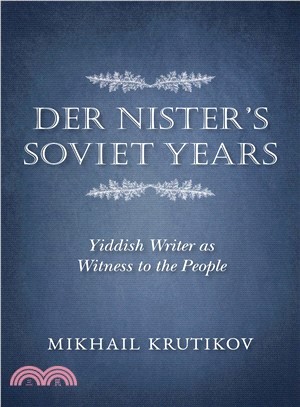 In Der Nister's Soviet Years, author Mikhail Krutikov focuses on the second half of the dramatic writing career of Soviet Yiddish writer Der Nister, pen name of Pinhas Kahanovich (1884–1950). Krutikov follows Der Nister's painful but ultimately successful literary transformation from his symbolist roots to social realism under severe ideological pressure from Soviet critics and authorities. This volume reveals how profoundly Der Nister was affected by the destruction of Jewish life during WWII and his own personal misfortunes. While Der Nister was writing a history of his generation, he was arrested for anti-government activities and died tragically from a botched surgery in the Gulag. Krutikov illustrates why Der Nister's work is so important to understandings of Soviet literature, the Russian Revolution, and the catastrophic demise of the Jewish community under Stalin.

Mikhail Krutikov is Professor and Chair of Slavic Languages and Literatures at the University of Michigan. He is author of From Kabbalah to Class Struggle: Expressionism, Marxism, and Yiddish Literature in the Life and Work of Meir Wiener and Yiddish Fiction and the Crisis of Modernity, 1905–1914.