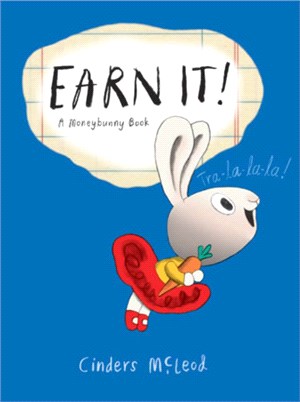 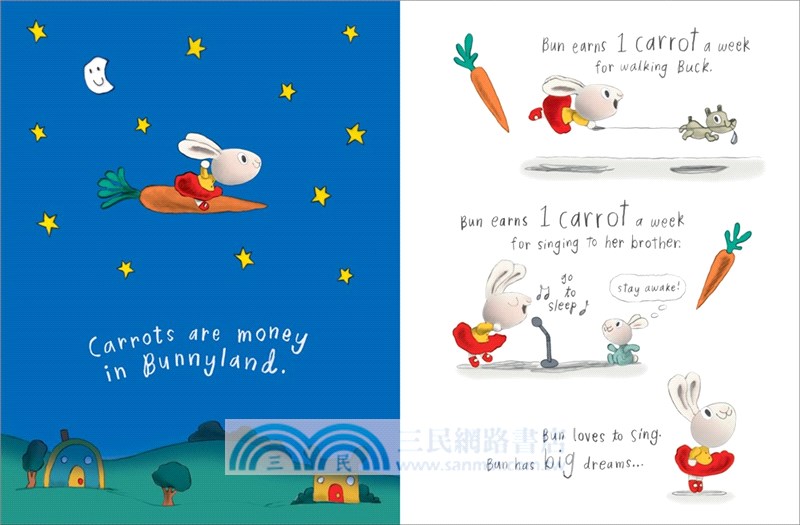 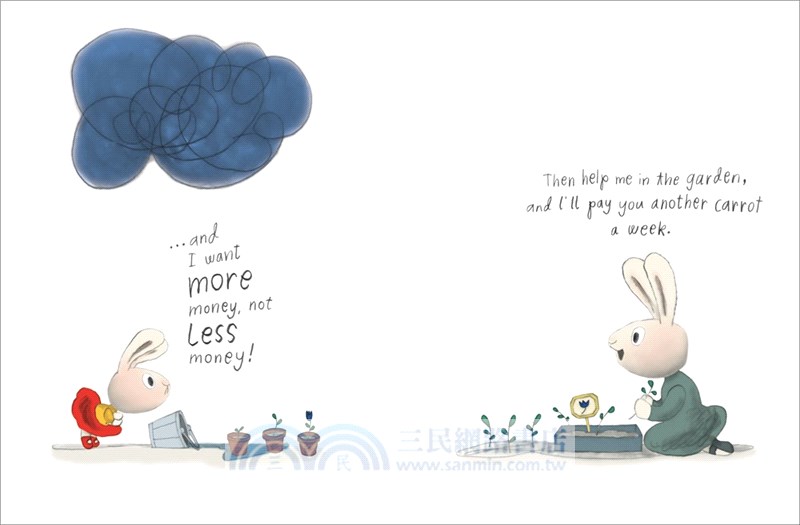 Earn It!
Bun wants to be rich and famous. She loves to sing and knows she’s meant for a career on stage. It should all be pretty easy—her mom can just drive her to the concert hall to perform! But her mom reminds her that most good things, like the garden they are growing, take time and work. At first, Bun isn’t terribly excited by the idea of singing lessons and practice, but as she does the math and daydreams about her future singing career, the more she starts to like the idea of earning her way to stardom—a feeling just as good as being rich and famous!

Spend It!
A charming introduction to simple money concepts in which a bunny learns he can't buy everything he wants with his allowance!

Sonny gets three whole carrots a week for his allowance and wants to buy everything with it! But he soon discovers his money won't go that far, and his mom tells him he needs to make some choices. That doesn't sound like much fun to Sonny, especially when he learns that the bouncy castle he's been eyeing goes for ONE HUNDRED carrots. Ridiculous! But eventually, after a little math and a little more thinking, he has a blast discovering what's really important to him and worth spending his carrots on.

Save It!
Honey earns two carrots a week for taking care of her siblings. Her FIVE siblings who are so loud and bouncy, she wishes she had a place of her own to escape to for some peace and quiet. So what's a bunny to do? Get creative and figure out a savings plan--even if it means forgoing a treat or two. But saving is worth it because with a little patience and perseverance, Honey will be able to make her dream of having her owns space come true! This is the third book in the internationally acclaimed Moneybunnies Series--following Spend It! and Earn It!

Give It!
Chummy longs to be a superhero. He wants to save the world—or at least Bunnyland—from dragons, so spending his carrots on a superhero costume seems like a great plan! When his grandma reminds him that there aren’t any dragons in Bunnyland, but that there are creatures that could use help, Chummy starts reconsidering the best way to spend his wad. This is the fourth book in the internationally acclaimed Moneybunny Books series that also includes Earn It!, Spend It!, and Save It!

Cinders McLeod also wrote Earn It! and is the creator of the book and comic strip Broomie Law. Her illustrations have appeared in the Guardian, the Express, the Observer, the Independent on Sunday, the Glasgow Herald, Scotland on Sunday, the Globe and Mail, CBC, Macleans, and the Ottawa Citizen. Her work has been recognized by the Society of Newspaper Design, National Magazine Awards, National Newspaper Awards, Advertising and Design Club of Canada, Thames Television, and The Guinness Book of Records. Cinders is also a singer-songwriter-doublebassist, with a CD (Beyond our Means) on Billy Bragg's Utility Label. She lives in Toronto, Canada.
PrevNext