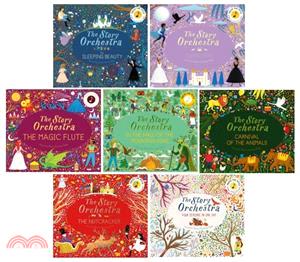 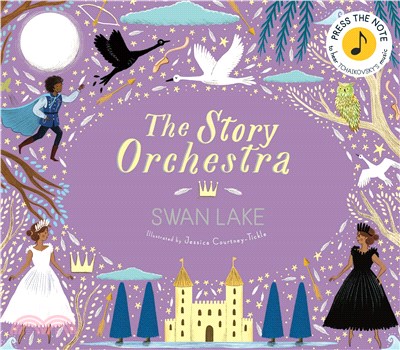 Discover the sorcery of The Magic Flute in this musical retelling of the opera - push the button on each beautiful scene to hear the vivid sound of an orchestra playing, and singers singing, from Mozart's score. This tale of a prince, a princess and a magic flute begins in a mountain ridge between two magical lands. Prince Tamino enters, chased by a dragon, but three brave mountain rangers gallop past on horseback to rescue him.

His cowardly friend Papageno comes out from his hiding place and they revive the prince. The rangers ask for one favour in return. Their boss, the Queen of the Night, asks Prince Tamino to rescue her daughter, Princess Pamina, from the evil Sun King.

She gives Tamino a magic flute and Papageno some magic bells to help them. The story follows Prince Tamino as he breaks into the Sun King's palace, charms the court with his magic flute, and gets caught by the guards. Will the prince escape with the princess? As you and your little one journey through the magical scenes, you will press the buttons to hear 10 excerpts from the opera's music.

At the back of the book, find a short biography of the composer, Mozart, with details about his composition of The Magic Flute. Next to this, you can replay the musical excerpts and, for each of them, read a discussion of the instruments, rhythms and musical techniques that make them so powerful. A glossary defines musical terms.

The Story Orchestra series brings classical music to life for children through gorgeously illustrated retellings of classic ballet, opera and program music stories paired with 10-second sound clips of orchestras playing from their musical scores. With The Story Orchestra keyboard sound books, children can play the famous melodies themselves with the sound of a real grand piano. Also available from the series: I Can Play (vol 1), Carnival of the Animals, Swan Lake, The Sleeping Beauty, The Nutcracker and Four Seasons in One Day.

Manufacturer's note: please pull the white tab out of the back of the book before use. Sound buttons require a firm push in exact location to work, which may be hard for young children. All sound clips are 10 seconds long.

The perfect primer to introduce children to classical music.