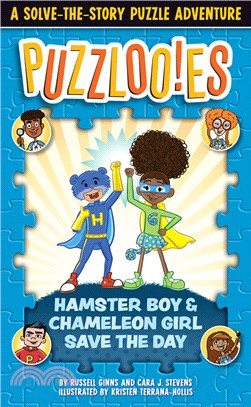 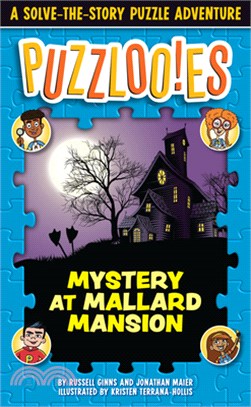 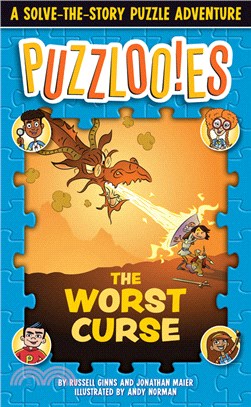 Snag a pencil. Sink into a silly story. Solve the puzzles and save the day!

Say goodbye to boring downtime and hello to Puzzlooies!, the latest in portable entertainment. Meant for kids to write in, these illustrated and compact books flip up like a reporter’s notebook, making them perfect for fast fun while on-the-go. Each zany adventure is packed with eclectic puzzles to decipher and decode―as well as jokes, riddles, and true trivia galore that’ll keep readers laughing ’til the very end…if they can reach it!

In Mystery at the Mallard Mansion, renowned private eye Detective Stanley Dench is hired by world-famous movie star Marvin Mallard to find his missing award. When the detective arrives at Marvin’s mansion, he discovers the star has become a dead duck! Why would anyone murder Marvin, and who is responsible for this feather-ruffling crime?

Long ago, an evil wizard dragon by the name of Charbroyle placed a curse upon the village of Muckshire. Now, all of the food in the village only tastes like one thing: overcooked broccoli! Noble Garlyck the Strong takes it upon herself to break this disgusting curse. Along with her trusty sidekick Pellet and other fantastic heroes, she must travel across a magical but dangerous kingdom and battle monsters.

The Museum of Supernatural History

Enter The Museum of Supernatural History with Jayden and Chad, where mythical monsters and uncanny exhibits are preserved and on display―or so they thought! Jayden and Chad soon discover the monsters are alive, and they need the boys’ help to defeat an ancient, evil power before it destroys the world.

Hamster Boy and Chameleon Girl Save the Day

In Hamster Boy and Chameleon Girl Save the Day, frenemies Liz and Arturo mysteriously gained superpowers linked to their class pets. At first they only used their powers for school and fun. But when a thief suddenly appears, their school principal recruits them to help save their town.

Marooned on the Moon

In Marooned on the Moon, Cam thought his dreams came true when he travelled to the Moon for a research mission. Instead, he gets stuck with a bunch of astro-jerks who are more into partying than studying craters…who also end up leaving Cam stranded on the Moon! Even though Cam is only a junior space cadet, he still trained at the space academy for three years. Soon, he devises a plan to return to Earth…

Space Cats to the Rescue

In Space Cats to the Rescue, an asteroid the size of ten hockey rinks is heading straight toward Earth! The Interplanetary Defense in Orbit Team has a terrible case of space sickness, so the fate of the earth is now left in the paws of four CAT-STRONAUTS. But training the fearless foursome of felines will take more than just milk and yarn. They’ll have to leap to the occasion and destroy the asteroid…before it destroys us!