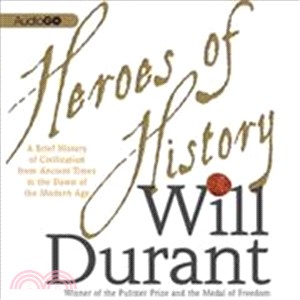 The Pulitzer Prize-winning historian uses the lives of the most influential people of all time to sum up human history with wit, knowledge, and a unique ability to explain events and ideas in simple, understandable terms. This brief history of civilization from ancient times to the dawn of the modern age is filled with life-enhancing wisdom and optimism.
Will Durant (1885-1981), reporter, seminarian, and teacher, earned his PhD from Columbia University in 1917. His best-known books are The Story of Philosophy, and The Story of Civilization, written in collaboration with his wife Ariel. Together, the Durants won the Medal of Freedom and Pulitzer Prize.
Grover Gardner: Named as one of the Best Voices of the Century by AudioFile, Grover Gardner is an actor, director, and award-winning narrator. His recordings have received excellent reviews from KLIATT and Library Journal, and several have received AudioFile Earphones Awards.
PrevNext