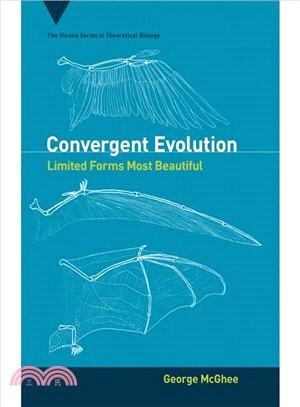 Charles Darwin famously concluded On the Origin of Species with a vision of"endless forms most beautiful" continually evolving. More than 150 years later manyevolutionary biologists see not endless forms but the same, or very similar, forms evolvingrepeatedly in many independent species lineages. A porpoise's fishlike fins, for example, are notinherited from fish ancestors but are independently derived convergent traits. In this book, GeorgeMcGhee describes the ubiquity of the phenomenon of convergent evolution and connects it directly tothe concept of evolutionary constraint--the idea that the number of evolutionary pathways availableto life are not endless, but quite limited. Convergent evolution occurs on all levels, from tinyorganic molecules to entire ecosystems of species. McGhee demonstrates its ubiquity in animals, bothherbivore and carnivore; in plants; in ecosystems; in molecules, including DNA, proteins, andenzymes; and even in minds, describing problem-solving behavior and group behavior as the productsof convergence. For each species example, he provides an abbreviated list of the major nodes in itsphylogenetic classification, allowing the reader to see the evolutionary relationship of a group ofspecies that have independently evolved a similar trait by convergent evolution. McGhee analyzes therole of functional and developmental constraints in producing convergent evolution, and considersthe scientific and philosophical implications of convergent evolution for the predictability of theevolutionary process.

George McGhee is Professor of Paleobiology in the Department of Earth and Planetary Sciences at Rutgers University and a Member of the Konrad Lorenz Institute for Evolution and Cognition Research in Altenberg, Austria.