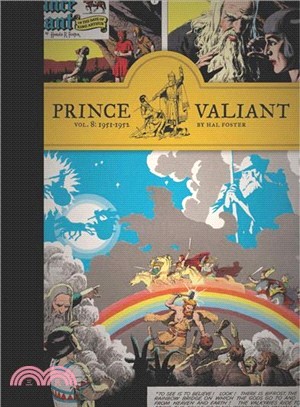 Our continuing reprinting of Hal Foster’s sumptuous epic — still scanned directly from Foster’s personal collection of syndicate proofs, providing the most spectacular iteration of this material since its original publication in Sunday newspaper supplements 60 years ago — enters the 1950s with this new volume.

The entire first third consists of the second half of the 15-month-long (!) Roman epic “The Missionaries,” which includes a dramatic, life-changing experience for Prince Geoffrey (aka “Arf ”) at its climax. After a brief stay back in Camelot (where the irrepressible Val and his friend Gawain indulge in some not-very-knightly pranks that end up costing them dearly), the two, accompanied by Arf, are summoned back to Thule, where Aleta presents Val with new twin daughters!

Foster also reintroduces such favorite characters as the piratical Boltar and the Indian princess Tillicum (now an unlikely romantic couple), and the year concludes with the beginning of “Valhalla” (another installment in the ongoing story of the problematic Christianization of the Vikings) — which includes one of Foster’s most dramatic and gorgeous splash panels (used here on the cover).

And as a back-up, Prince Valiant Volume 8 includes an article by Foster scholar Brian M. Kane on Foster’s near-forgot-ten “Mounties” ad campaign paintings from the 1930s, along with a number of gorgeous reproductions.