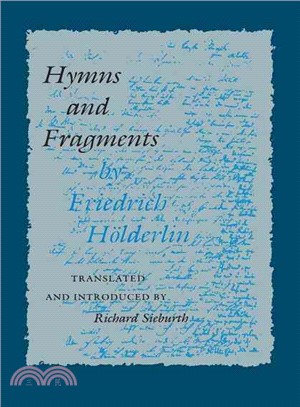 Despite his influence on such figures as Nietzsche, Rilke, Heidegger, and Celan, Friedrich Holderlin (1770-1843) is only now being fully appreciated as perhaps the first great modern of European poetry. Drawing on the most recent scholarship, this annotated translation conveys the radical idiom and vision that continue to make him a contemporary. Richard Sieburth includes almost all Holderlin's late poems in free rhythms from the years between 1801 and 1806, the period just prior to his hospitalization for insanity.

Professor Sieburth's critical introduction discusses the poet's career, assesses his role as a link between classicism and romanticism, and explores Holderlin's ongoing importance to modern poetics and philosophy. Annotations explicate the individual poems, a number of which are translated into English for the first time.