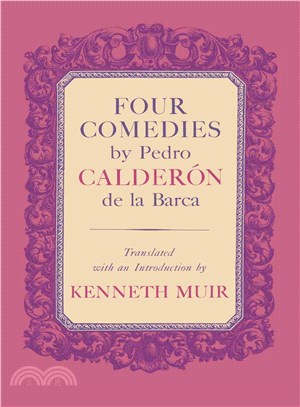 Calderon, the great dramatist of Spain's Golden Age, was a skilled writer of comedy. His serious dramas have long been highly regarded in the English-speaking world, but his many sparkling comedies are an untapped reservoir for the contemporary theater. The four plays in this volume, three of which appear in English for the first time, have been translated by Kenneth Muir, the noted British scholar and director.

These are comedies of intrigue. They turn on mysterious, quarrels, and jealousies, and they abound in complication and misunderstandings, yet in the end all is explained, to the delight of the audience. Muir's long experience with acting and directing and his keen ear for the nuances of the English language, together with his perceptive critical scholarship, have enabled him to produce a text that actors can speak naturally, and that modern audiences can enjoy as did the audiences of seventeenth-century Spain. The graceful, poetical dialogue and the masterly stagecraft of Calderon are undiminished in these deft translations.

The plays featured are From Bad to Worse, The Secret Spoken Aloud, The Worst is Not Always Certain, andThe Advantages and Disadvantages of a Name. Ann L. Mackenzie has provided an introduction to each play and notes on the text that will be useful to the actors and directors who seek to present these comedies as they were intended -- on the stage.

Kenneth Muir (1907--1996) was a literary scholar and author, prominent in the fields of Shakespeare studies and English Renaissance theatre. He served as King Alfred Professor of English Literature at Liverpool University from 1951 to 1974.