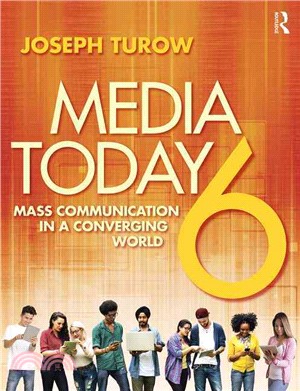 "Turow’s Media Today: Mass Communication in a Converging World, now in its fifth edition, chooses [a] cutting-edge option. This is a student-friendly publication, offering aids such as definitions of key terms, colourful infographics, case studies and end-of-chapter review questions. There’s a companion website, too, and a password-protected website for instructors."—Philip Kemp, Times Higher Education

Media Today uses convergence as a lens that puts students at the center of the profound changes in the 21st century media world. Through the convergence lens they learn to think critically about the role of media today and what these changes mean for their lives presently and in the future. The book’s media systems approach helps students to look carefully at how media is created, distributed, and exhibited in the new world that the digital revolution has created. In this way,Media Today goes beyond the traditional mass communication textbook’s focus on consuming media, to give students an insider’s perspective on how media businesses operate. How exactly does Google profit from web searches? What will a magazine look like five years from now?

Informative and engaging, Media Today, Fifth Edition, is characterized by its focus on:

Joseph Turow—who has been teaching Intro to Mass Communication for well over a decade—demonstrates the many ways that media convergence and the pervasiveness of the Internet have blurred distinctions between and among various media. From newspapers to video games or social networking to mobile platforms, Media Today prepares students to live in the digital world of media.

Joseph Turow is Robert Lewis Shayon Professor of Communication at the University of Pennsylvania’s Annenberg School for Communication. A former Chair of the Mass Communication Division of the International Communication Association, he is the author of more than 150 articles and?10 books on media industries.